A team of Project Veritas investigative journalists went to uncover how the families of Eric Garner, Trayvon Martin, and Michael Brown really feel about Al Sharpton. This powerful video from James O'Keefe paints a vivid picture of how the communities of Staten Island, NY; Miami, Florida; and Ferguson, MO really feel about Sharpton’s involvement in the aftermath of the deaths of Garner, Martin, and Brown.This video confirms and highlights what many have long suspected: Al Sharpton is motivated by avarice and pride, rather than social justice and bringing about change.

A Project Veritas journalist spoke with the late Eric Garner’s oldest daughter, Erica, on a brisk January evening in Staten Island. Garner did not hold back when asked about Sharpton’s involvement, stating: “he’s about the money.” Garner went on to accuse Sharpton and his National Action Network of “attacking” her for not giving them credit; and trying to capitalize on her father’s death.

“Instead of me, he wants his face in front of them,” said Garner of Sharpton. Garner felt as if Sharpton and NAN were trying to take advantage of her:  “Al Sharpton paid for the funeral. She’s [Cynthia Davis, President of the Staten Island Chapter of NAN] trying to make me feel like I owe them."

Read by millions and seen by even more on their way to or from work, the story broke on the entire front page of the seventh most circulated daily newspaper in the United States. New York Post 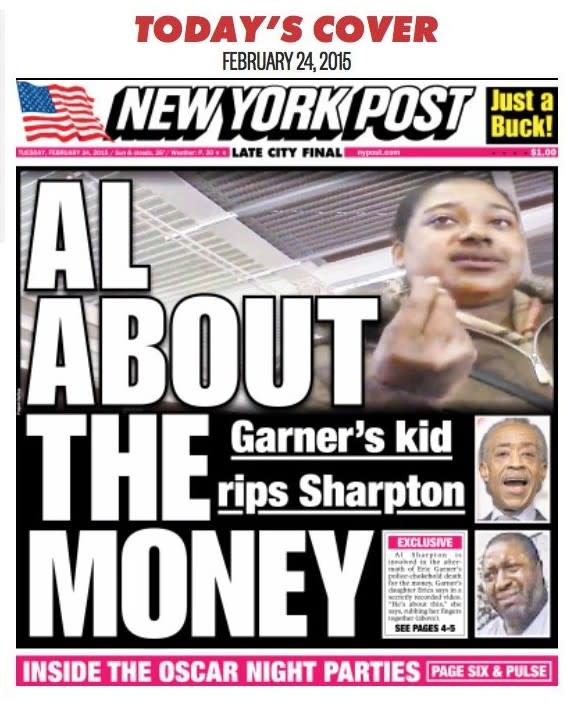 Since this video was released, it has been used as a historical reference on many articles and profile pieces about Al Sharpton, ranging from this piece at The Daily Caller to this one at Vanity Fair.

Following the negative comments directed at the Reverend Al Sharpton by the family and representatives of Eric Garner, Trayvon Martin, and Michael Brown, James O’Keefe went to Al Sharpton’s weekly National Action Network to question the Reverend. Before being “compelled” to leave the rally by several very large men standing over him, the good Reverend directly addressed O’Keefe and another Project Veritas journalist mid speech. A visibly flustered Sharpton said that O’Keefe was clowning and accused him (and the right wing in general) of distorting, exaggerating, and lying.

2/24/15 "James O’Keefe and Project Veritas just put out another video that a lot of lefties won’t enjoy. This time, they talked to some of the people Al Sharpton claims to be helping. He’s not helping them. Daily Caller

2/25/15 Eric Garner daughter accuses Al Sharpton of being 'all about the money' and 'egotistical' in secret video filmed by Project Veritas. Daily Mail

2/24/15 In a new video released by Project Veritas, the daughter of Eric Gardner sounds off on Al Sharpton’s monetization of the race-based movement-building that occurred in the wake of her father’s police-related death. She also openly complains about National Action Network, Sharpton’s advocacy group, and their tendency to hijack homegrown demonstrations and social movements. Legal Insurrection

2/24/15 Journalist James O'Keefe has struck the Al Sharpton universe. On hidden camera, Sharpton allies say Sharpton is all about the "shakedown" and raising money. These are statements from allies and self-described "friends" of Sharpton. PJ Media

2/24/15 Eric Garner’s daughter, Erica Snipes, says Al Sharpton is “all about the money” and “egotistical” according to an undercover Project Veritas video. Inquisitr

2/24/15 In a secret video recorded by conservative guerrilla reporter James O'Keefe, the daughter of Eric Garner. the man who died while in a police chokehold in New York, says that Sharpton will do anything for money. American Thinker

2/24/15 James O’Keefe of Project Veritas has done it again. This time he got Eric Garner, Trayvon Martin’s families and Michael Brown’s lawyer to speak up about Al Sharpton. The Federalist Papers

2/24/15 Erica Snipes, the daughter of Eric Garner — the New Yorker who was placed in a chokehold by police and died hours later at the hospital — has issued a scathing assessment of Al Sharpton, reportedly saying "the reverend only cares about money, not principle", during a secretly recorded conversation with Project Veritas. The Washington Times

2/24/15 As MSNBC host and advocate Al Sharpton faces both a lawsuit and the potential end of his weekday show, a new video from  Project Veritas shows family members, supporters and lawyers for Eric Garner, Michael Brown, and Trayvon Martin criticizing Sharpton as primarily interested in monetary gain through their civil rights cases. The Washington Free Beacon

2/27/15 Project Veritas released an anti-Sharpton video in which various African Americans, including the daughter of New York Police Department choke-hold victim Eric Garner, were shown describing Sharpton as basically an opportunist and provocateur and who leverages other people’s misfortunes into personal celebrity and cares first and foremost about pocketing cash. Daily Beast

2/24/15 "Afraid For His Life? Now We Know Why… New James O'Keefe Video Goes After Al Sharpton. He's 'All About The Money'! Twitchy

2/26/15 The Rev. Al Sharpton's credibility is shot, now that the daughter of chokehold victim Eric Garner has said the civil-rights activist is motivated by money, according to the founder of the Project Veritas, which released a video of the complaint. News Max

2/27/15 Al Sharpton freaks out when James O’Keefe shows up at his speech to ask about Eric Garner accusation. The Right Scoop