[WESTCHESTER, N.Y. – Apr. 5, 2021] Project Veritas founder and CEO James O’Keefe gave an update on the organization’s defamation lawsuit against the New York Times today, explaining how a recent court ruling could potentially flip the script on the mainstream media.

Justice Charles D. Wood wrote there is “substantial basis in law” for the suit to proceed, despite The New York Times citing Wikipedia as a source (along with various mainstream media outlets), to claim Project Veritas was “libel proof.” 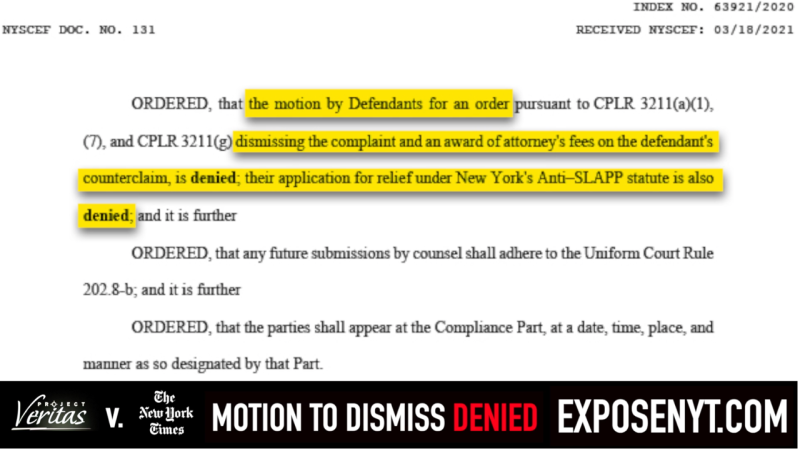 Wood also wrote in his decision, taking into account the “total context and tone of the stories,” that the actions of The New York Times could cause “harm” to Veritas’ “reputation as a media source -- because the reader may read these news Articles, expecting facts, not opinion, and conclude that Veritas is a partisan zealot group.”

O’Keefe said the ruling from the New York Supreme Court judge could act as a journalistic game-changer by raising the bar for the fourth estate, when it comes to telling the truth.

Veritas approached New York Times’ Executive Editor, Dean Baquet, to inquire as to why his outlet would cite Wikipedia as a source, and his response was to laugh maniacally rather than answer the question.

George Washington University Law School Professor Jonathan Turley credited Veritas with scoring a “major victory” with “potentially wide reach” and even said he would cite the case in the classroom when teaching his students about defamation.

If anyone has information regarding corruption inside the media, government, or other high-powered institutions, they can send an encrypted message to: VeritasTips@protonmail.com