“As a member of this body, I question Mr. Zuckerberg’s veracity, and challenge his
willingness to cooperate with our oversight authority, diverting congressional
resources during time-sensitive investigations, and materially impeding our
work,” wrote Gaetz in a letter released today.

Zuckerberg testified April 10, 2018 before a joint hearing of the Senate Judiciary Committee and the Senate Commerce, Science and Transportation Committee, and then the next day before the House Energy and Commerce Committee—and in both hearing the Facebook CEO was asked about his company’s suppression of content supporting the president and his agenda.

On both occasions, members of Congress asked Mr. Zuckerberg about allegations that Facebook censored and suppressed content supportive of President Donald Trump and other conservatives. In his responses, Mr. Zuckerberg repeatedly and categorically denied any bias against conservative speech, persons, policies, or politics. Mr. Zuckerberg also dismissed the suggestion that Facebook exercises any form of editorial manipulation. However, recent reports from Project Veritas, featuring whistleblowers who worked as Facebook’s “content moderators,” have shown ample evidence of such bias and manipulation.”

Accordingly, I respectfully refer Mr. Zuckerberg to the Department for an investigation of potential violations of 18 U.S.C. §§1001, 1505, and 1621 for materially false statements made to Congress while testifying under oath. 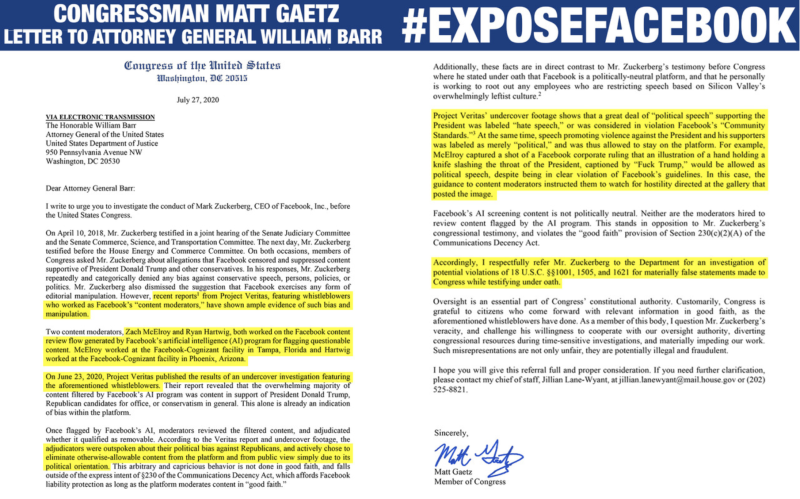 Zuckerberg would be guilty if a jury is convinced, he falsified, concealed or covered up by any trick, scheme of device a material fact or made any materially false, fictitious, or fraudulent statement or representation during his congressional testimony.

If convicted, Zuckerberg would be facing up to five years in federal prison.

“If someone—anyone—lies to a lawmaker, he or she is deliberately manipulating the legislative process,” he said.

Project Veritas released two reports from its investigation into Facebook, based on former content moderators, Zach McElroy and Ryan Hartwig. Both men came to Project Veritas
offering to become insiders and each documented their work environments for at least three months.

McElroy said he would eagerly testify before Congress and tell them everything he knows. “I am ready and willing to join the fight by testifying about what I saw at Facebook. We must take action on big tech censorship now, before it’s too late.”

McElroy, who worked at a facility in Tampa, Florida, said the artificial intelligence program that flags content for review by the content moderators had to have been programmed to seek out Facebook posts and comments favorable to Republicans.

“I saw a stark contrast between Republicans versus Democrats in the queue,” said McElroy. “I saw upwards of 75-to-80 percent of the posts in that queue were from Republican pages, politicians, journalists and pages that supported the president or supported conservatives.”

The content queue gives moderators the options to allow, delete or escalate to a supervisor, he said.

One of the Facebook content moderators caught on tape said: “If Someone is Wearing a MAGA Hat, I Am Going to Delete Them for Terrorism.”

In the report released June 25, Hartwig said it reached the point at his Phoenix facility, where he felt it was dangerous for him to come out as a Trump supporter.

Hartwig said he was a daily witness to censorship of conservative viewpoints, but he wanted the American people to have proof.