[WESTCHESTER, NY – Apr. 28, 2021] Project Veritas founder and CEO, James O’Keefe, provided an update on the organization’s defamation lawsuit against The New York Times today and read directly from the Old Gray Lady’s official response to the lawsuit, which was filed last week.

The Times was forced to answer Veritas’ allegations and despite admitting certain points – the newspaper continually issued denials, or claimed the defendants lacked the knowledge necessary to formulate an acceptable answer. 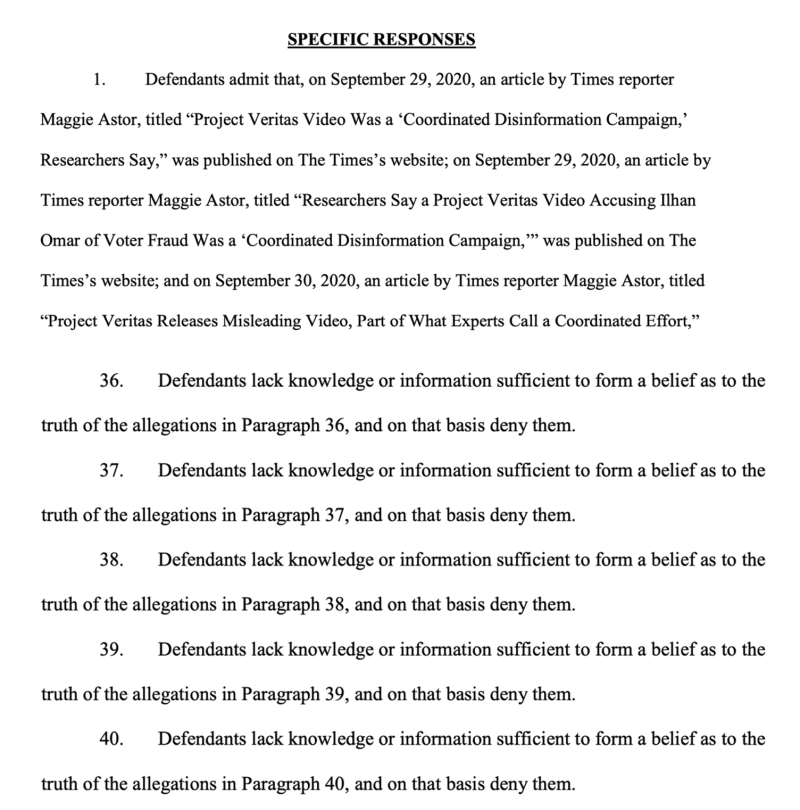 Despite this, the Times was forced to admit that neither Maggie Astor nor Tiffany Hsu are “opinion writer[s].”

This admission was made despite The New York Times’ efforts to wield “opinion” as a shield for the falsities Astor and Hsu presented as fact.

The Times article said Veritas' video was part of a “coordinated disinformation campaign,” because Veritas shared an advance copy of the video with influencers and reporters – an act called embargoing.  In their answer, the New York Times was forced to admit they did the same thing – having received an advance copy of the Election Integrity Partnership blog post they were reporting on before the blog post was published.  In short, the Times is admitting they did the same thing they accused Veritas of doing.

The New York Times also admitted Astor was incorrect when she originally reported that the ballot harvesting exposed in Veritas’ video, “may not have been illegal, because a district court judge in July temporarily suspended Minnesota’s ban on ‘ballot harvesting,’” now admitting that the law was never in fact suspended.

“These are not hard things to figure out,” said O’Keefe, noting that The Times admits it failed to seek comment from so much as even one of the named sources in the Veritas video – including a source the Times admits it relied on a source over ten times.  Perhaps the Times was afraid of being told the video was real.

O’Keefe said there is, “no amount of money” the New York Times can offer that would make him settle this case. Veritas is headed to a trial-by-jury.

Be Brave. Do Something. Make your stand. The Time is Now. If you witness corruption, fraud or waste within institutions of power -- Send an encrypted message to our Signal: 914-653-3110. Or contact us at VeritasTips@protonmail.com