“Thanks to our brave insider Cary Poarch, we were able to expose the active bias Jeff Zucker, the chairman of Warner Media News and Sports and the president of CNN Worldwide, has ingrained in the culture of that once-proud organization,” said James O’Keefe, the founding CEO of Project Veritas.

The lawsuit said: “Cary Poarch, a CNN employee in the Washington, D.C. bureau, states in the Project Veritas footage that CNN “purports to be facts first, and that’s clearly not the case.”

O’Keefe said Poarch took tremendous professional and personal risks to expose Zucker’s mandates to attack the president and how its leftwing culture dominates and informs its reporting.

“The Trump campaign cites us for two pages of a nine-page document because we were able to report that even CNN staffers were upset about the anti-Trump mandates put out by Zucker every morning in conference calls Cary recorded and we made public,” he said.

The lawsuit was triggered by a CNN report that stated that the Trump campaign sought help from the Russians in the 2020 election cycle, according to the filing.

“CNN clearly had a malicious motive in publishing the defamatory article and acted with reckless disregard for the truth. Extensive public information, known by and available to CNN, confirms that the campaign has not sought Russian help in the 2020 election and has made no statements about seeking any such help,” the campaign said.

The campaign further alleged: “CNN’s actions show willful misconduct, malice, fraud, wantonness, oppression and that entire want of care which raises a presumption of conscious indifference to the consequences, and accordingly the Campaign is entitled to an award of punitive damages against CNN.”

Defamation is the deliberate damaging of a reputation and the Trump campaign used quotes from Project Veritas reporting to establish that CNN was motivated by animus.

“It is not entirely surprising that CNN would publish such blatantly false statements about the Campaign. There is extensive evidence that CNN and its writer, Larry Noble, are extremely biased against the Campaign. This evidence includes, among other things, undercover video footage taken by the Project Veritas news organization in which CNN staff members admit on camera that CNN’s coverage is extremely biased against the Campaign, the administration, and Republicans in general.”

Here is another example the campaign cited from Project Veritas reporting that speaks directly to how CNN connected the president to Russia:

“In the Project Veritas footage, Nick Neville, a media coordinator at CNN, admits that CNN’s chief executive, Jeff Zucker, has a personal vendetta against the president. John Bonifield, a supervising producer at CNN, states in the Project Veritas footage that CNN’s coverage regarding Russia’s alleged interference with the 2016 election was “mostly bullshit” and that the president “is probably right to say…you are witch-hunting me.”

Project Veritas’ recording of Christian Sierra, a CNN media coordinator, which was also cited by the Trump campaign exposed how everyday workers at the company recognized that Zucker’s directives were unrelated to the news.

“Christian Sierra, a Media Coordinator at CNN, states in the Project Veritas footage that Mr. Zucker wanted impeachment to be the top story every day, that “everyone at the network” complains about the amount of such coverage, and that CNN’s “Democratic interviews are like softballs, compared to the Republicans.”

O’Keefe said one reason why Project Veritas reporting can be cited in court documents is that PV does not use anonymous sources. “We record what people actually say as they actually say it. What we recorded at CNN proved that the outlet had reneged on their mission to report the news without bias.” YouTube 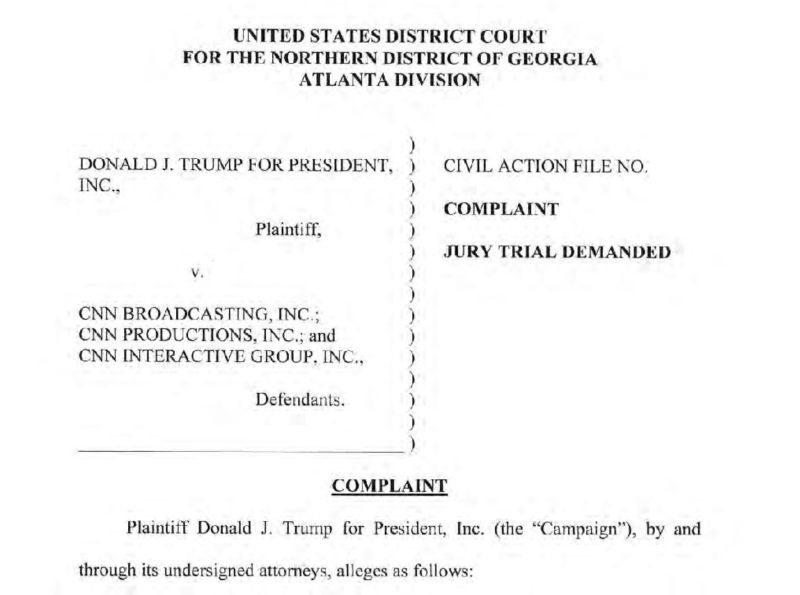