It was a mistake to make those edits in the first NPR investigation release.

The most well-known example of the selective-editing charge made against O’Keefe and his journalists was the first video released as part of the 2011 undercover investigation into National Public Radio fundraising. In the investigation, Betsy Liley, NPR’s senior director of institutional giving, and Ron Schiller, the president of the NPR Foundation, met with two undercover journalists posing as officials with the Muslim Education Action Center.

Schiller and Liley were told the limousine that picked them up was paid for by MEAC and MEAC was looking to donate millions of dollars to NPR. They were also told MEAC was founded by members of the Muslim Brotherhood and that MEAC wanted to give the money with the expectation that it would influence NPR’s news coverage.

Project Veritas released a video of the three men and one woman having a business lunch at Georgetown’s Café Milano. In the course of the table talk, the hidden camera is on Schiller and slightly on Liley.

The confusion arose from Project Veritas posting its raw footage online, in order to demonstrate its good faith. The practice stopped because individuals sought to fabricate editing decisions that implied deception.

The first edit criticized comes at the 00:38 mark, when O’Keefe, the video’s narrator, resumes his voiceover with images of the phony MEAC website: “On the MEAC website, it said the organization sought to ‘spread the acceptance of Sharia across the world.’” 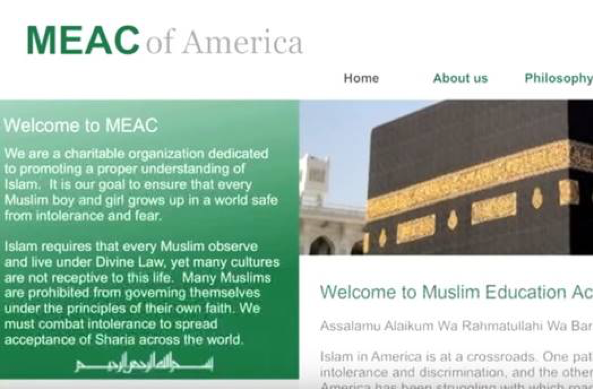 Then, at the 00:48 mark ending at 00:51, footage from the hidden camera plays with Schiller finishing a story he punctuates with a hearty laugh: “That’s what they said.”

The charge is this edit creates the impression Schiller is laughing along in agreement with the idea of spreading Sharia, the system of jurisprudence grounded in Islam. This charge falls on its own weight, since it is perfectly obvious Schiller is unaware of the post-production voiceover.

The editing decision was to show the group sitting at lunch with a taste of Schiller’s personality, then go to the establishment shot of the Café Milano sign and then carry on with the clips of the same setting.

The juxtaposition of the two clips was unfortunate—and a mistake. There was a decision made to show the group having lunch before going to the rest of the video. The two-second clip could have been flipped with the restaurant sign, but then the sequence would have had Schiller laughing and then going straight into business.

Schiller was actually laughing about the confusion over the reservation. The Café Milano staff told him he was part of a group of 20 people, not a table of four.

Schiller: They initially directed us to a big room where I guess there’s, oh, a party also under the [inaudible].
Project Veritas Journalist: Really?

Schiller: That’s what they said.

Journalist: They actually tried to direct [unintelligible] I wasn’t sure why.

Schiller: We thought we were joining two people, not twenty people. [laughs] It was quite strange, glad we worked that out.

The second contested edit in this video comes at the 02:34 mark, and the edit is signaled by a white flash, or dip-to-white. In this video, the viewer is alerted to the edits, so they can follow along realizing that Schiller is not speaking in continuous stream.

At the 02:34 mark, Schiller is talking about the Republican Party and the then-insurgent Tea Party and in the table talk, Schiller and the undercover journalist finish each other’s thoughts.

Schiller: And not just Islamophobia, but really xenophobic, basically they are, they are, they believe in sort of white, middle America gun-toting, I mean it’s scary. They’re seriously racist, racist people.

In the raw footage, posted by Project Veritas to accompany the video’s release, critics took issue with this editing decision, because Schiller begins this observation about the Republican Party by citing two Republicans he knows who voted for President Barack Obama because of the changes to the party.

Beginning at the 28:58 mark in the raw footage, this is how Schiller starts:

The charge is the Schiller was not speaking as himself, but merely relaying the sentiments of two other people to potential donors.

The tape speaks for itself. Clearly from the raw footage, Schiller is opening up with the what he heard from two Republicans, but when the journalist interrupts him to finish his sentence—these are his own views—something validated by the expression on his face and the tone of his voice, which shifts from storyteller to personal.

In fact, later in the video at the 03:25 mark, Schiller tells the journalists that his own personal opinion:

Right now, there is about – I’ll talk personally as opposed to wearing my NPR hat. It feels to me as though there’s a real anti-intellectual move on the part of a significant part of the Republican Party.

This is the rest of what is said on the subject from the raw footage:

Liley: (shaking her head in agreement) No.

The last word on this goes to Professor Alicia Shepard, the author of 2006
book Woodward & Bernstein: Living in the shadow of Watergate. Shortly after leaving her post at Georgetown University, where she taught media ethics at the school’s graduate journalism program, the professor weighed in on the NPR video controversy:

Yes, it's been shown the tapes were doctored to make Schiller's statements seem even worse than they already were – and thus to discredit NPR. One should expect that from
conservative activist James O'Keefe III.

But the fact is undeniable – and Schiller admits it – that he said some egregiously offensive
things.

Obviously, if Schiller and associate, Betsy Liley, hadn't been duped into meeting with the fake Muslim Educational Action Center, this wouldn't be an issue.

The title of her piece: Never Take Your Hat Off In Public.