[LONDON—Oct. 20, 2020] A Google advertising account executive told a Project Veritas journalist with a hidden camera how he and his company exploit its market dominance to advance a political agenda and suppress opposing political views.

Amaduzzi said on the other hand, Google can suppress Republicans using the so-called Trust and Safety team. “You can, potentially--censor out news from your search engine.” 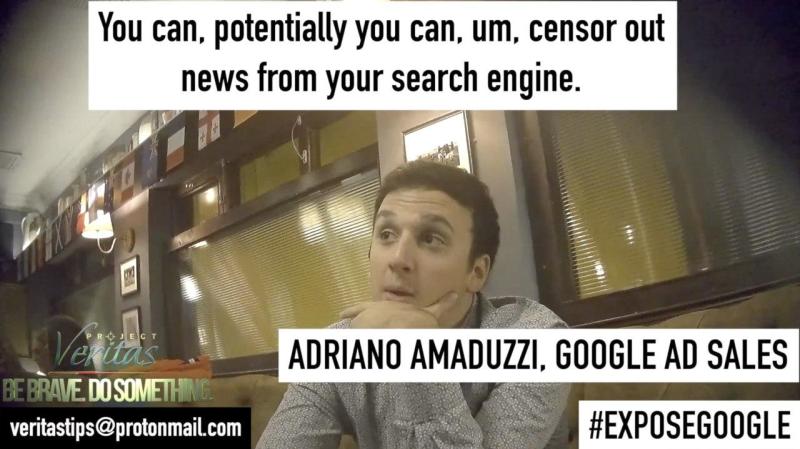 James O’Keefe, the founder and CEO of Project Veritas, said Amaduzzi’s comments are consistent with other Project Veritas investigations into how social media giants manipulate speech and content.

“Recently we’ve seen censorship of free thought and stories from the Big Tech giants. Many believe this kind of editorial suppression will affect the upcoming election,” O’Keefe said. “But it seems the biggest tech giant of them all– Google- may have other ways to impact the election--this time coming from their ad sales division overseas.”

Amaduzzi even bragged to the Project Veritas journalist about how he chose to ignore a request for pro-Brexit ads to be placed on Google and its platforms.

“Funny enough about Brexit, I had a guy, linked to, me, for no reason --, I don't know why, contacted me from LinkedIn and say: ‘Hi I'm head of digital infrastructure of the Conservative Party of the United Kingdom, we would like to do advertising with Google, could you help me with that?’ I was like—I didn’t answer,” Amaduzzi said.

Adriano Amaduzzi: “You're telling an Italian that lives in London that you want to advertise Brexit. It’s like, seriously?”

Amaduzzi: “Yeah exactly, promoting the blocking [of the] free movement of non-European people.”

Amaduzzi: And you're asking a European guy to help you do that, I was like, sure.”

Then, later in the exchange:

Journalist: “Because you're the gatekeeper of Google, what you're going to allow to advertise. So, if they want to promote it—"

Amaduzzi: “No, not really, I wish I was that influential. I'm just one of the pawns.”

Journalist: “But in a way you are because you said you can say no, which is—"

Project Veritas is a registered 501(c)3 organization. Project Veritas does not advocate specific resolutions to the issues raised through its investigations. Support our work today!