The Department of Justice then muzzled Microsoft from disclosing these orders via a series of secrecy orders signed by magistrates.

The documents further reveal the DOJ then went behind U.S. District Court Judge, Analisa Torres’, back to obtain extensions on the gag-orders on Microsoft from magistrate judges after Judge Torres ruled Project Veritas was entitled to “journalistic privileges.”

Despite multiple opportunities to do so, the DOJ has not publicly disclosed the orders, warrants, or subpoenas to Judge Torres or Special Master Judge Barbara Jones – who was appointed by Judge Torres to protect Veritas’ “journalistic privileges” from potential DOJ overreach. Judge Torres ruled that the DOJ’s investigation must be overseen by Judge Jones and ordered the DOJ not to review any materials seized from Project Veritas without Judge Jones’ approval.

The DOJ has not sought Judge Jones’ approval to review Project Veritas’ materials seized from Microsoft.

The documents uncover a sixteen-month clandestine campaign against journalists in which the DOJ obtained 7 secret orders, warrants and subpoenas from six magistrates within the Southern District of New York. 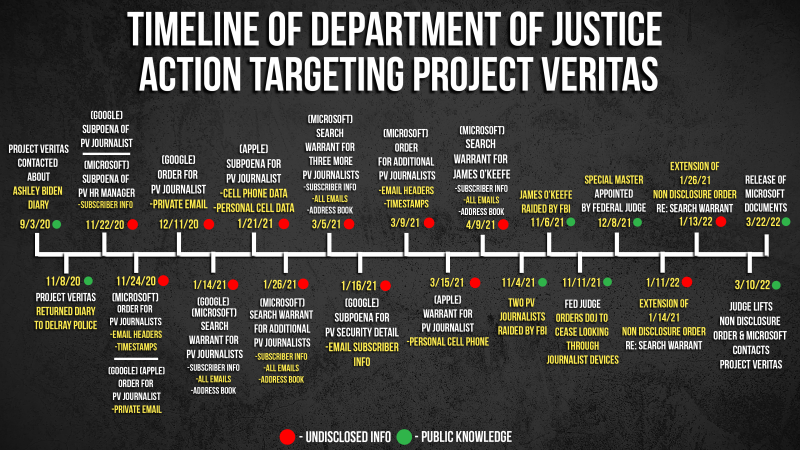 Paul Calli, an attorney for Project Veritas, fiercely opposed the actions from the DOJ which he called an act of “violence” to the First Amendment.

In a motion filed Tuesday, Calli argued, “By the time [Project Veritas] filed the Motion to Appoint a Special Master, the government already had the opportunity to review Project Veritas’ journalistic and attorney-client privileged materials.” Based on preliminary research data, the SDNY appears to be in possession of nearly 150K documents they should not have. In addition to the emails, the SDNY obtained over one thousand contacts from journalists that they also failed to disclose to Judge Torres or to the Special Master.

Project Veritas’ Motion seeks to require the SDNY to comply with the Special Master order by stopping their review of the surreptitiously obtained emails and disclose other hidden spying campaigns executed against the non-profit’s journalists.  The SDNY “has launched a retributive campaign that does violence to the First Amendment,” writes Calli.  “While the Special Master litigation proceeded, the government apparently misled the Court by omission, failing to inform it, and failing to inform the aggrieved journalists, that the government had already obtained the contents of privileged emails from Project Veritas’ cloud computing provider.”

The documents reveal a peak into the SDNY’s covert surveillance of American journalists, commenced by Assistant United States Attorney, Robert B. Sobelman.

The surveillance culminated in a search warrant seeking every email sent to or from Project Veritas founder and CEO, James O’Keefe, for a three-month period, along with every contact he had ever saved.  By virtue of these orders, the SDNY gained unsupervised and unfettered access to O’Keefe’s emails – including privileged communications with his attorneys and notes to and from O’Keefe’s confidential sources, among other constitutionally protected communications.

The SDNY also managed to convince a rotating cadre of magistrates to give the SDNY unchecked access to seven other journalists’ emails and contacts.

According to an order the DOJ sought to keep secret, to justify obtaining access to journalists’ emails, the Justice Department appears to have argued “there is probable cause to believe the email account(s), maintained at premises controlled by Microsoft Corporation, USA, contain evidence, fruits, and instrumentalities of crime.”

Each order, warrant and subpoena were accompanied by a Non-Disclosure Orders (NDO) which barred Microsoft from disclosing the SDNY’s surveillance for one year, claiming without evidence, that disclosure could lead to destruction of evidence by Project Veritas.  Multiple NDOs were set to expire in January, 2022.

On December 8, 2021, however, Judge Torres, over the opposition of the SDNY, granted Project Veritas’ request to appoint a Special Master to supervise the SDNY’s review of materials seized from journalists to protect the news organization’s “journalistic privileges,” among other things.

Judge Torres ordered the SDNY to provide the seized “materials to the Special Master” Judge Barbara Jones who, rather than the SDNY, would “conduct an initial review of the extracted materials,” and rule on “objections” raised by Project Veritas “on any grounds – including on grounds related to any First Amendment concerns, journalistic concerns, and attorney-client privileges.”

When a round of the SDNY’s NDOs requiring the spying to be kept secret began expiring in January 2022, the SDNY, having had their arguments rejected two out of two times by Judge Torres, apparently opted to again keep the surveillance of journalists secret from Judge Torres and instead obtained renewals of those orders from Magistrates who were apparently unaware of Judge Torres’ order.

The SDNY’s final act of secrecy was seeking yet another round of renewals, prompting Microsoft to point out in a scathing un-filed motion that the government’s claims that Project Veritas might destroy evidence if the surveillance were disclosed were unsupportable.

Microsoft pointed out that the DOJ’s investigation was already public and no proof that Project Veritas would destroy evidence had been offered by the SDNY.  As a result of Microsoft’s briefing, the SDNY relented and permitted Microsoft to disclose the surveillance, which Microsoft did within hours.

These revelations come on the heels of a trio of FBI raids of Project Veritas journalists, including O’Keefe, during which the SDNY indiscriminately seized 47 devices (including a device belonging to a journalist’s roommate).

The SDNY’s spying campaign represents the latest example of governmental misconduct in a seemingly politically-motivated investigation by President Biden’s Department of Justice into Project Veritas’ news-gathering activities surrounding allegations against then-candidate, Joe Biden, made by his daughter, Ashley Biden, in her diary.

Though Project Veritas ultimately did not publish the allegations in the diary, it attempted to corroborate the allegations by requesting comment from Mr. Biden and his daughter, whose attorney, Roberta Kaplan, reacted by saying, “We should send [the request for comment] to [the] SDNY.”  The SDNY appears to have been doing Ms. Biden’s bidding ever since with little to no oversight beyond what appear to be judicial rubber-stamps from magistrates not fully briefed on the matter by the SDNY.

Why the Biden Administration’s Department of Justice sought voluminous amounts of journalists’ emails, including confidential sources and attorney-client privileged data from Microsoft despite vowing a year ago to protect press freedom, is one of many questions the Biden Administration will likely have to answer in the coming days.