On Friday, reporter Caleb Ecarma published an article to Mediaite.com which contained defamatory information about videographer James O’Keefe. Ecarma and O’Keefe met earlier that week for an interview that was filmed in full by Project Veritas. 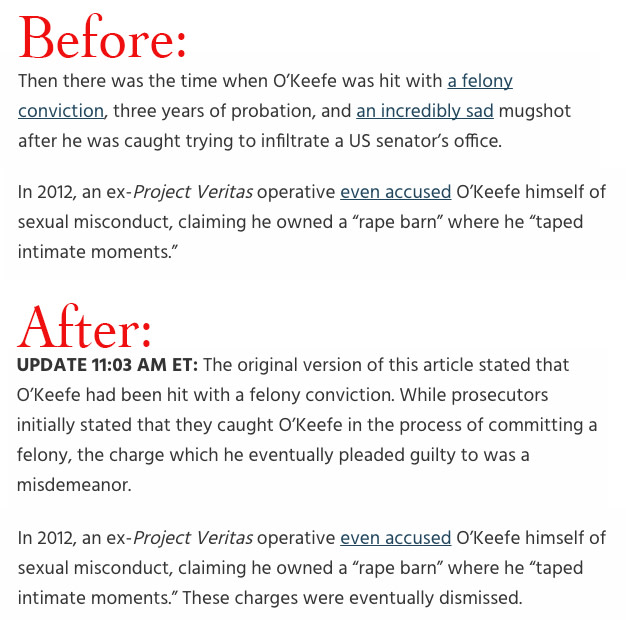 The article made a patently false claim, stating that “O’Keefe was hit with a felony conviction,” even though he has never been charged with any felony.

The article also made outrageous and lewd implications by writing “an ex-Project Veritas operative even accused O’Keefe himself of sexual misconduct, claiming he owned a ‘rape barn’ where he ‘taped intimate moments.'” The article failed to mention the pertinent detail that the case was dismissed.

After a social media firestorm and direct emails to Mediaite brass, they agreed to issue the two corrections in their article.

This episode goes to show just how far fake news reporters will go to fabricate and spread a false narrative.

In the full and uncut video, O’Keefe repeatedly answers all of Ecarma’s questions about intent. “I’ve answered the question three times…it seems like you don’t believe me,” says O’Keefe. “This is the problem with media, this is the problem with journalists. They have a hypothesis that is not concurrent with reality.”

See the video below:

Following these corrections, Mediaite published another article by Justin Baragona, this time resorting to ad hominem, stating “O’Keefe has a reputation for being a shallow and craven attention whore, who often parades his own ignorance under the false guise of ‘media bias.'”

Baragona continued the Mediaite tradition of getting facts wrong in a tweet, which Project Veritas quickly corrected in a reply.