Here’s a quick overview of this week’s news regarding the first video in our new series on teachers unions, which we released last Tuesday.

The Yonkers Board of Education released a statement this week about our undercover investigation.

“After having the opportunity to review the Project Veritas videos and subsequent interviews by Yonkers Federation of Teachers (YFT) President Patricia Puleo and Vice President Paul Diamond, the Yonkers Board of Education Trustees and Superintendent Dr. Quezada are appalled at what we saw and heard,” stated Board of Education President Rev. Steve Lopez.

The Yonkers Tribune reported that Democratic Yonkers City Councilman Christopher Johnson also released a statement about our video, in which he called for an investigation of the Yonkers Federation of Teachers.

The Yonkers Tribune also reported on a statement released by the Yonkers City Parent Teachers Association (YCPTA), in which they also supported an investigation of the union officials who were caught on camera.

News 12 reported today that Brendan McGrath, the Yonkers’ Inspector General has launched an investigation following the release of our undercover video. Following his investigation, the inspector general can recommend whether the union officials are suspended or terminated.

The Journal News had the following story on the front page of their publication Saturday morning. 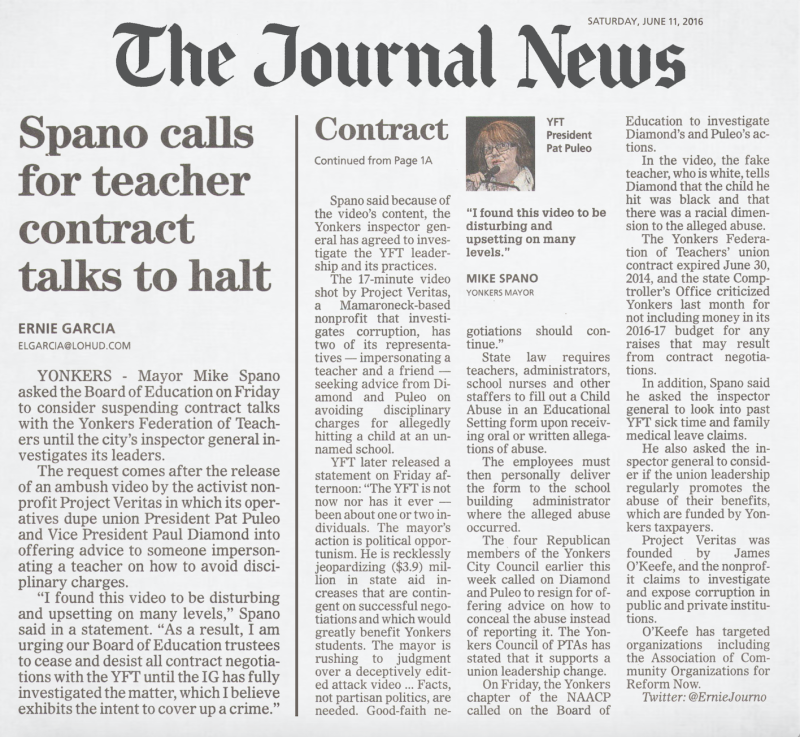