It is true that because America's mainstream media is overwhelmingly leftist and in favor of centralized federal power in Washington, their best opportunities for Project Veritas are in the institutions dominated by allies of the mainstream media, such as colleges and universities, state and federal bureaucracies and the media itself.

The best example of Project Veritas going after Republicans was in 2014, when undercover journalists joined Wisconsin Republican state Sen. Mike Ellis, the president of the state senate, at his regular after-work bar. Ellis was one of the two or three most powerful men in the state behind Republican Gov. Scott Walker.

Using hidden cameras, Project Veritas recorded Ellis talking about his plan to start his own SuperPAC, which he would direct in violation of campaign laws. After the video was released, Ellis announced he would not seek reelection and would retire from public life.

To be clear: Ellis was a very conservative Republican. His rating from the environmental group, the Sierra Club, was 17 percent. His score from Wisconsin Manufacturers & Commerce was 100 percent.

It was not the case that Ellis was a party rebel. The woman he said was going to have to lead the SuperPAC was Judi Rhodes Engels, a party operative, who rode her Harley Davidson with Walker and whose husband was a member of the Walker administration. 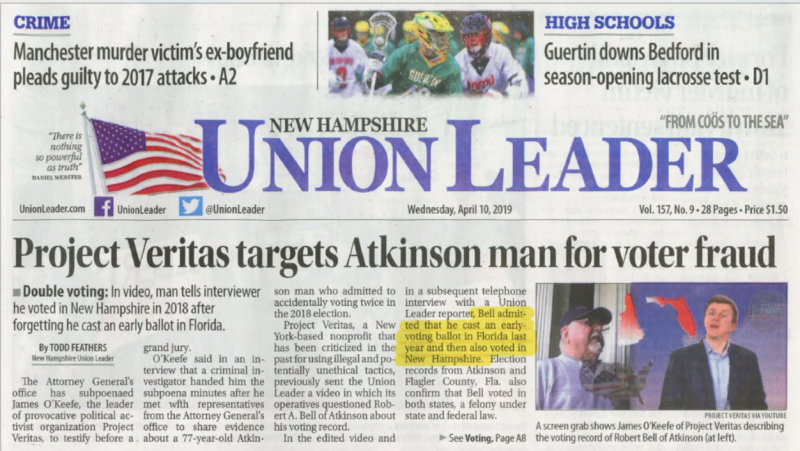 The 2019 Project Veritas investigation into New Hampshire voter fraud led to a jury convicting an Atkinson Republican of illegal voting in both the Granite State and Florida. 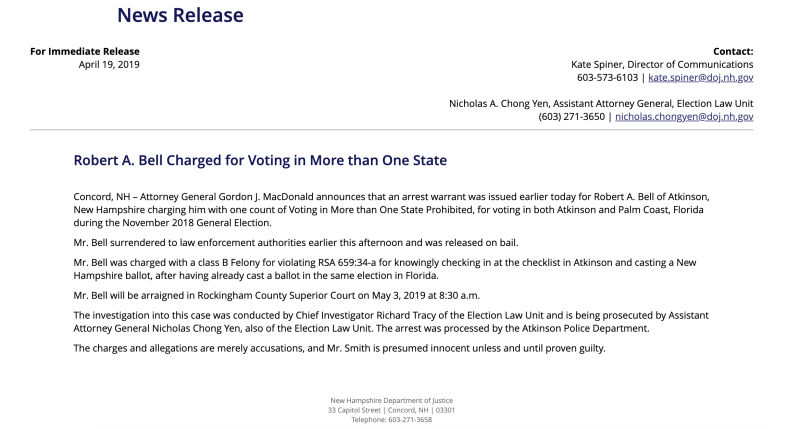 Robert Bell said to Project Veritas undercover journalists (UCJs) he voted in the 2018 midterms on Nov. 1, in Palm Coast, Florida, where he used to live and own property, and in New Hampshire on Nov. 6.

Bell said to the undercover journalists he is a New Hampshire resident. Still, he was in Florida for a funeral and took advantage of the state's early voting. “I was still on the voter list.”

Although he no longer lives in Florida, nor owns property there, Bell said he kept his Florida drivers license and has a vehicle registered there.

At sentencing, Alan Cronheim told Rockingham County Superior Court Judge Martin Honigberg his client was confused and did not mean to break the law.

Here is an excerpt from the New Hampshire Union Leader’s coverage:

Cronheim said Bell never tried to hide the fact that he voted twice when he was first confronted by members of the political activist organization Project Veritas, which
questioned him about the election and distributed a video showing Bell admitting to voting twice.

Bell even called Atkinson police to complain about Project Veritas, only to end up getting charged with a crime

Honigberg gave Bell a suspended 90-day sentence, a $1,000 fine, and a lifetime ban on Bell voting in New Hampshire.

“Confusing dates does not equal a lack of criminal intent,” Chong Yen said. “There was no confusion when the defendant deliberately chose the candidates he wanted in both states.”

“Voter fraud is real, and the impact is multifaceted," O'Keefe said. "Elections have been overturned, criminal investigations have occurred, but most importantly, the integrity of
the American electoral system is being undermined."

O’Keefe said Project Veritas is looking for insiders to join the fight to defend the electoral system.

James O’Keefe and Project Veritas went after a senior Republican when O’Keefe confronted Wisconsin’s Rep. Jim Sensenbrenner at a March 2014 town hall meeting in his district.

The congressman, who is a former chairman of the House Judiciary Committee and one
of the House prosecutors in the Senate impeachment trial of President Bill Clinton, was the lead sponsor of the 2014 Voter Rights Act, H.R. 3899. Sensenbrenner crafted the bill with Sen. Patrick Leahy (D.-Vt.) as a response to the Supreme Court’s June 25, 2013 Shelby ruling, which ruled parts of the 1965 Voting Rights Act inoperative.

O’Keefe was dressed in a matching coat and hat with hunting camouflage and he sat in the back. After the congressman answered a few other questions, he called on O’Keefe, who asked him about his VRA bill.

O’Keefe: “In the legislation, it seems to contain language that explicitly removes white people from the protections of the Voting Rights Act.”

Sensenbrenner: “It does not do that. One of the things that the Voting Rights Act has always looked at is that of minority turnout is lower than average, then there is extra scrutiny by the Justice Department—what the bill does not do is it says that if there is discrimination against white people—which may happen in certain heavily-black areas—then, there would be extra scrutiny. There’s nothing that is targeting people by race in the Voting Rights Act.”

O’Keefe: “The bill says: ‘The term minority means person of a race other than white,’ so wouldn’t be racialist language that you just said was not in the bill?”

O’Keefe: “That language doesn’t exist in the bill?

Sensenbrenner: “The language does exist in the bill—I would dispute that it is racialist.”

Here is a video with more of the exchange between Sensenbrenner and O’Keefe:

According to a bill summary written by the Congressional Research Service, the Sensenbrenner bill increases the federal role in state and local elections. The bill:

Expands the types of violations triggering the authority of a court to retain such jurisdiction to include certain violations of the Act as well as violations of any federal
voting rights law that prohibits discrimination on the basis of race, color, or membership in a language minority group.

The bill does far more than simply reverse the Shelby County decision. It also imposes
burdensome and impractical federal mandates on every state and local election official. For example, election officials will be required to post data about poll workers 30 days before an election, including the race of all voters in a precinct. If the election officials fail to post, naturally Sensenbrenner’s bill gives plaintiffs the right to sue. For good measure, any finding that election officials were liable for a failure-to-post violation will count against the jurisdiction and help recapture that jurisdiction for federal preclearance mandates.

In other words, Sensenbrenner has written a dream bill for Democrat trial lawyers and activist groups fighting election-integrity laws.

The bill was referred to the House Judiciary Committee’s Constitution and Civil Justice sub-committee and was not brought to the House floor for a vote.