In December 2018, Project Veritas Action succeeded in the United States District Court for the District of Massachusetts in challenging the two-party consent recording statute.  The trial court issued a historic decision granting the right to record public officials in public using a hidden recorder and held the two-party consent statute unconstitutional: 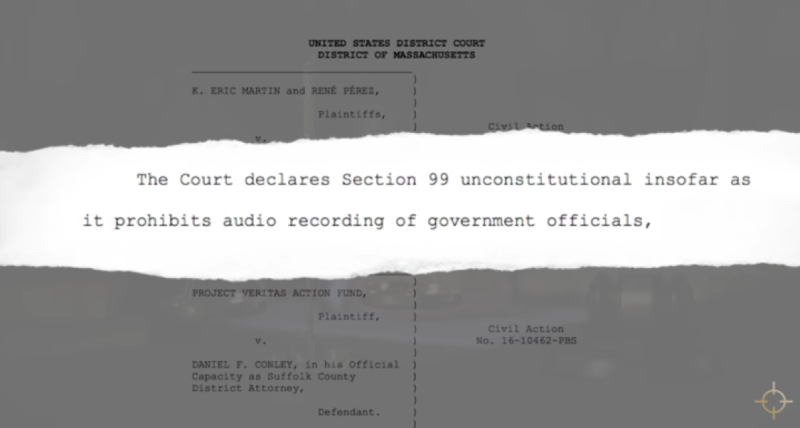 However, in December 2020, the First Circuit Court of Appeals partially reversed this decision and held the case for overturning the statute in its entirety was not “ripe,” or ready, for review.  The First Circuit however upheld the trial court’s ruling to the extent it banned secret audio recording of a police officers carrying out their duties in public.

In May 2021, Project Veritas Action Fund filed its first-ever Petition for Writ of Certiorari in the U.S. Supreme Court, appealing the First Circuit’s ruling. 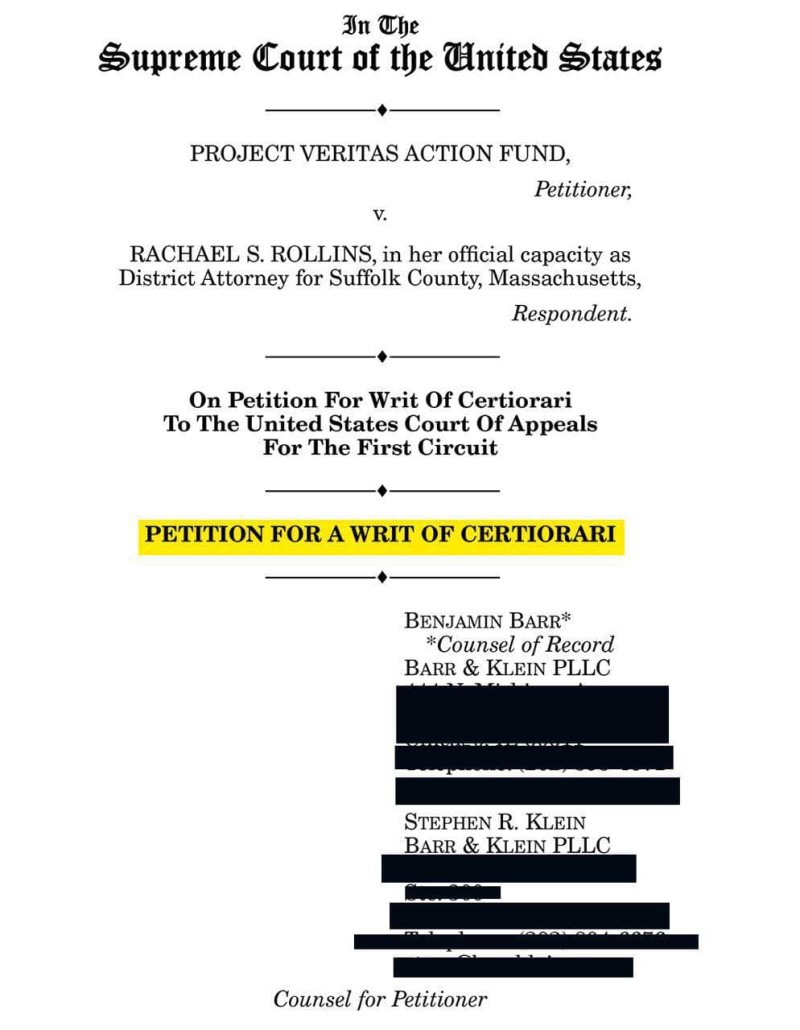 It should be known that Massachusetts is the only state in the country to outright ban all secret audio recordings.  We firmly believe this ban is unconstitutional and impedes the ability of journalists in truthful newsgathering.  Project Veritas Action Fund never ceases fighting for Americans’ constitutional rights. Individual citizens must be allowed to perform their First Amendment right to report on public and private corruption. For many citizen journalists, an undercover recording is the most effective way of delivering newsworthy facts to the public.

In 2016, democratic political operatives’ dark art of orchestrating violence at Donald Trump rallies was just one example of the lengths to which they were willing to go. At one rally, an older woman, and a Democratic activist, Shirley Teter, claimed a Trump supporter had cold-cocked her at a Trump rally during his 2016 Presidential campaign. Scott Foval, a prominent Democratic activist at the time, claimed credit for orchestrating these protests.

With a gang of four high-priced, high-powered lawyers, the disabled, elderly woman waged a campaign of costly federal litigation. On the second day of the trial, at the request of the Judge, our lawyers made an oral argument for a very rare Rule 50 Directed Verdict believing the plaintiff, had not presented a credible case. The judge heard the oral arguments on the Directed Verdict Motion from both sides, and he ruled against Teter. Effectively, the judge ruled that the jury could not possibly have ruled in favor of Teter:

... if citizens and the media are handcuffed by a fear of liability, that’s detrimental to political discourse, it is detrimental to society as a whole, and it is detrimental, really, to our fundamental freedom....If I've gotten this wrong, and the Fourth Circuit says that this is not what the law is, I hesitate to think where the First Amendment is going in this country.

Project Veritas continues to execute the court’s assessment of costs against Shirley Teter.

In June 2017, Steve Wentz, who was the president of the United Teachers of Wichita at the time he was recorded saying  “I Will Kick Your F***ing Ass” while talking about a student, brought suit against Project Veritas for invasion of privacy and defamation. The lawsuit was
filed in a U.S. District Court in Florida.  Throughout the video in question, Wentz admits to being physically abusive to his students and not caring about the consequences since he is the president of the union.

Wentz complained the videos and accompanying stories of how he was allegedly abusive to students were defamatory. He cited wiretapping statutes due to a Veritas journalist recording his "off the record" story while undercover.

The order from Judge G. Kendall Sharp was unequivocal.

“Wentz is unable to sufficiently identify a false statement published by defendants that plausibly supports his defamation claims.”

“Notably, many of the alleged defamatory statements made by Project Veritas and O’Keefe, both in the Wentz Video and the written content, are recitations of Wentz’s own admitted actions and statements.”

The judge ruled the videos to be authentic.

There was no reasonable expectation of privacy, the judge said.

The judge also ruled the videos were not edited out of context: “Thus, the Court will grant summary judgment in favor of Project Veritas and O'Keefe.”

Project Veritas won its Motion for Summary Judgment. Project Veritas also won a Motion for Sanctions and Fees and the judge assessed approximately $10,000 against Wentz for failure to provide truthful responses and documents during discovery.

Wentz’s payment to Project Veritas was the beginning of our “Wall of Pain.”

4. Motion to Strike Granted with Prejudice: Koerber vs Project Veritas (Koerber I) and Koerber II

As part of the Common Core series released in January 2016, National Geographic Cengage textbook sales representative, Kimberly Koerber, said, "the dead white guys did not create this country," and "damn the Second Amendment," along with additional controversial statements. Following the release, Koerber sued Project Veritas in Los Angeles County Court alleging, among other things, her privacy had been violated because she had been recorded without her knowledge.  The court dismissed the case with prejudice.

The Court found that Koerber’s complaint had been filed past the one-year statute of limitations. However, the Court went on to decide each of Koerber’s 11 claimed causes of action against Project Veritas and found that none had any merit.

Koerber appealed the dismissal of her lawsuit, which the Appeals Court affirmed in our favor, another significant victory for us. She then petitioned the California Supreme Court, but they denied her request to hear the case. To date, the courts have awarded Project Veritas in excess of $180K against Koerber, with additional awards pending.  We are aggressively pursuing collections.

In Koerber II vs. Project Veritas et al, the judge has dismissed the Emotional Distress, Negligence, and the Interference with Prospective Economic Relations claims based on Project Veritas’ Anti-SLAPP, Strategic Lawsuit Against Public Participation, Motion to Strike.  We continue to challenge the Defamation and Unfair Business Practices claims. The judge awarded Project Veritas in excess of $180K for its attorneys’ fees for the Anti-SLAPP Motion so far.

In 2016, Dianne Barrow was featured in the first Project Veritas Common Core video series. In the video, she admits that Common Core isn’t about the educational welfare of children, but rather, money.
Houghton-Mifflin terminated Barrow at the time of the video’s release. Barrow filed suit October 24, 2017 against James O’Keefe, Project Veritas, and other Project Veritas associates in Los Angeles County Court.

In her complaint, Barrow alleged defendants violated the Racketeer Influenced Corruption Organizations Act, or RICO, California Business
and Professions Code and various state tort laws. She sought general, punitive, and statuary damages, as well as an injunctive order compelling Project Veritas to take down the video from all internet sources.

On May 20, 2015, James O’Keefe was driving on the East side of New York with some colleagues, witnessed, then recorded, Augustin Maldonado, a TSA agent drinking what appeared to be alcohol while behind the wheel.

Maldonado sued for intentional infliction of emotional distress and defamation. However, the court disagreed with him and called the video a “mini-drama” and said Mr. Maldonado is an example of the ambush-style journalism made popular by Sixty Minutes and Candid Camera. The court dismissed all claims made by Maldonado, including for emotional distress and defamation, and found the video to be protected by the First Amendment as Constitutionally protected speech.

Due to confidentiality, we are not at liberty to provide any details.