[SAN FRANCISCO – May 31, 2022] Project Veritas has published an internal e-mail from cloud-based software giant, Salesforce, which shows one of its Senior Director’s lobbying for employees to cancel the company’s contract with the National Rifle Association.

The e-mail, sent by Senior Director of Technology Partnerships, Ray Shipley, begs the question about what can be done to “stop the cycle of unimaginable violence,” in the wake of the mass shooting in Uvalde, Texas. 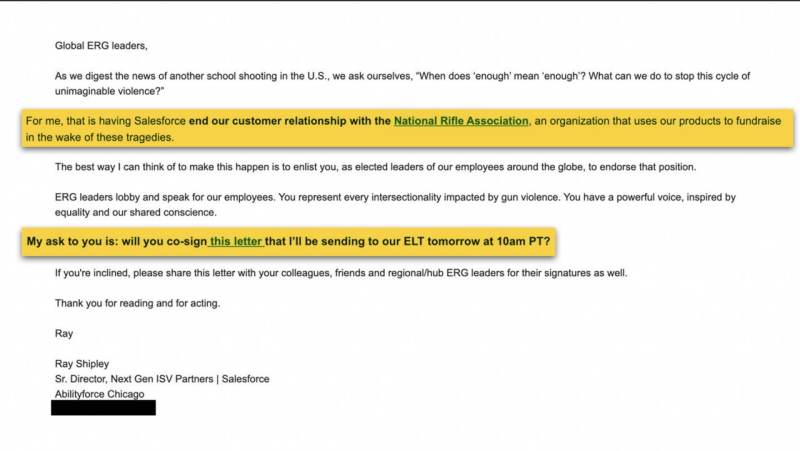 “For me, that is having Salesforce end our customer relationship with the National Rifle Association,” Shipley said in the e-mail. He then hyperlinked to a letter to be delivered to Salesforce leadership which calls for an end to their contract with the NRA adding, “My ask to you is that you co-sign this letter.”

On May 26th, the San Francisco Gate ran a story  with the headline, “Thousands of workers at Salesforce, San Francisco’s biggest employer, demand company stop working with NRA.”

Salesforce, which is a publicly-traded company, has proudly embraced activism under its Chief Executive Officer, Marc Benioff, who once referred to himself as an “activist CEO.”

They also have a history of cancelling partnerships with organizations for partisan reasons. On January 27, 2021, Salesforce sent Project Veritas notification that it would extend the contract with the company because of what they deemed “a business decision”.