Earlier this month, Project Veritas awarded Katie Couric with the first ever #FakeNews award for ‘Best Deceptive Editing, 2016.’ We are continuing by awarding the Washington Post our second award, ‘Best Fake News Headline, 2016’. 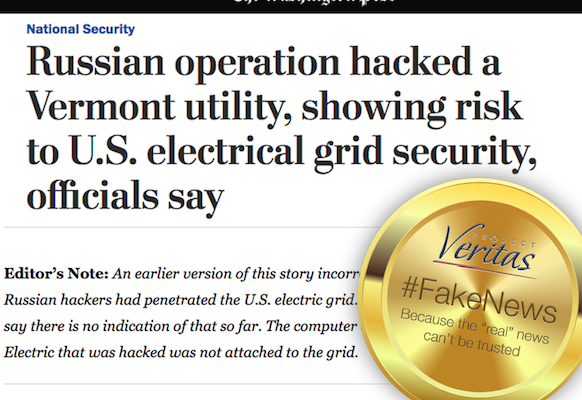 Late last year, the Washington Post released an article titled Russian operation hacked a Vermont utility, showing risk to U.S. electrical grid security, officials say. But there was a problem–the computer that was hacked wasn’t even actually attached to the grid.

To make matters worse, there was never any actual proof that the Russians were involved–only a misunderstanding about a “mysterious code,” which turned out to be an employee checking his Yahoo email account.

Two facts wrong (and that’s just in the headline!).

The article was released on Dec 31, 2016 (it appears that the WashPo really wanted to make the cut for our 2016 #FakeNews Award–looks like it paid off!), and it took two days for them to write the follow-up piece regarding their mistakes.

This irresponsible journalism spread fear throughout the general populace. With mainstream media sources like ABC News, the Chicago Tribune, and others citing the Washington Post, the story became an instant sensation. The Vermont Governor Peter Shumlin commented:

“Vermonters and all Americans should be both alarmed and outraged that one of the world’s leading thugs, Vladimir Putin, has been attempting to hack our electric grid, which we rely on to support our quality of life, economy, health, and safety.”

“Using the Internet Archive’s Wayback Machine, we can see that sometime between 9:24PM and 10:06PM the Post updated the article to indicate that multiple computer systems at the utility had been breached (“computers” plural), but that further data was still being collected…

“Despite the article ballooning from 8 to 18 paragraphs, the publication date of the article remained unchanged and no editorial note was appended, meaning that a reader being forwarded a link to the article would have no way of knowing the article they were seeing was in any way changed from the original version published 2 hours prior.”

Due to not only the apparent lack of journalistic ethic on the part of the Washington Post, but also the outlandish series of events that followed as a direct result, we are awarding the Fake News Award: Best Headline, 2016 to the Washington Post, and authors of the article Juliet Eilperin and Adam Entous.

If you have any suggestions for 2017 #FakeNews Awards, leave a comment below!