The confidential Facebook memorandum explicitly stated: “Priority may be given to H-1B applicants from China and Korea to foster larger communities of diverse workers at Facebook.” However, when asked for comment, Facebook adamantly opposed the authenticity then refused to answer any additional questions. 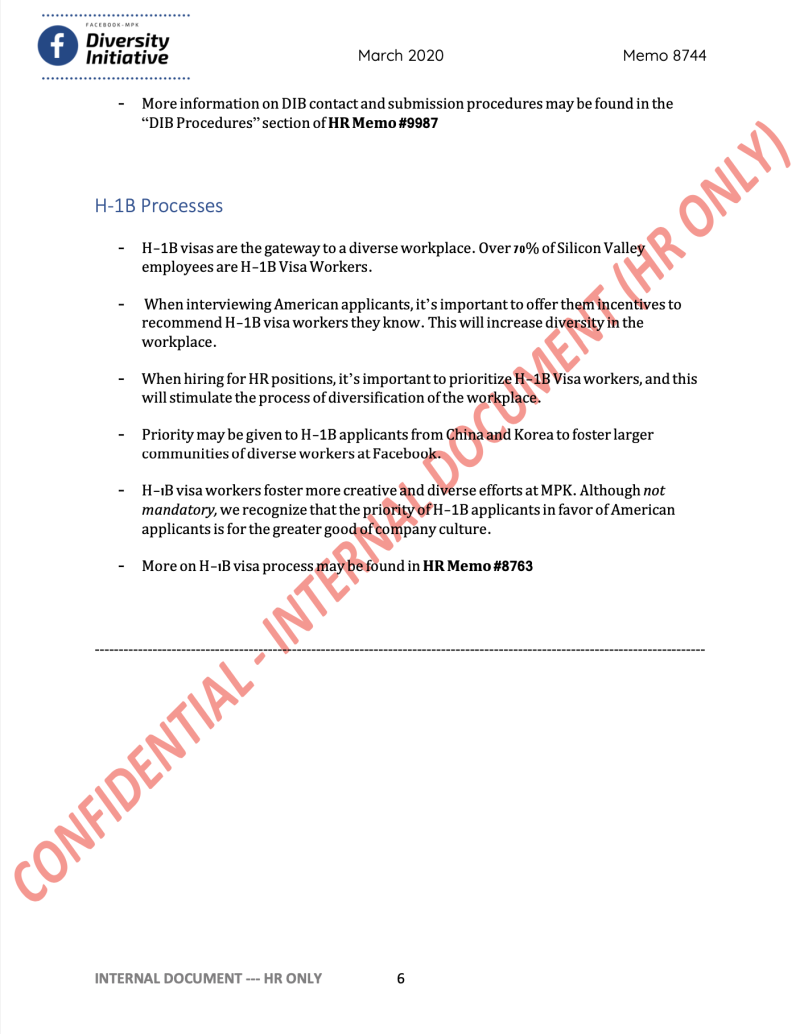 Andy Stone, the policy communications director for Facebook told James O’Keefe, the founder and CEO of Project Veritas, the document was not real in a phone call, but wouldn’t go further.

O’Keefe said Facebook is posturing, rather than addressing the issues in the leaked
memo.

“The social media giant is clearly taking a defensive stance which raises questions beyond the document. Their corporate posture is telling that while a record number of Americans are looking for work, one of America's leading companies is credited with a memo targeting recruitment of foreign workers by nationality, then suspending six employees they suspect
of revealing it. It doesn’t add up,” O’Keefe said.

Immediately following Stone’s comments O’Keefe spoke with the Insider via Skype who was simultaneously losing access to his workplace accounts.

“I'm not sure why this is happening or what's going on. I'm not receiving any responses from anyone. I'm reaching out to multiple people, and I have yet to hear back from anybody,” said the Insider.

In a previous interview with O’Keefe, the Insider said the H-1B policy memo was acquired after it had come across his desk in “normal operation. The insider grew concerned after reading the Diversity Initiative Board described in the memo, was to create internal momentum for diversity while highlighting: “…Priority may be given to H-1B applicants from China and Korea to foster larger communities of diverse workers at Facebook.”

The H-1B Visa program was enacted in 1990 to help the Pentagon and American companies fill high-skill positions, according to the USCIS website:

This visa category applies to people who wish to perform services in a specialty occupation, services of exceptional merit and ability relating to a Department of Defense cooperative research and development project, or services as a fashion model of distinguished merit or ability.

Mr. X, the Facebook insider, told O’Keefe during his first interview he was motivated to come forward to right wrongs.

Mr. X: “In my normal course of work, it happened to come across my desk and, uh, I noticed it and, and I sort of read over it and came to, came to the knowledge of it that way.

James O’Keefe: What bothers you most about this document?

Mr. X: “The fact that there's so much, um, that is asked to be kept secret, bothers me extensively. I think that if there's forces that are making decisions, people have a right to know if those, especially if those decisions affect them.” 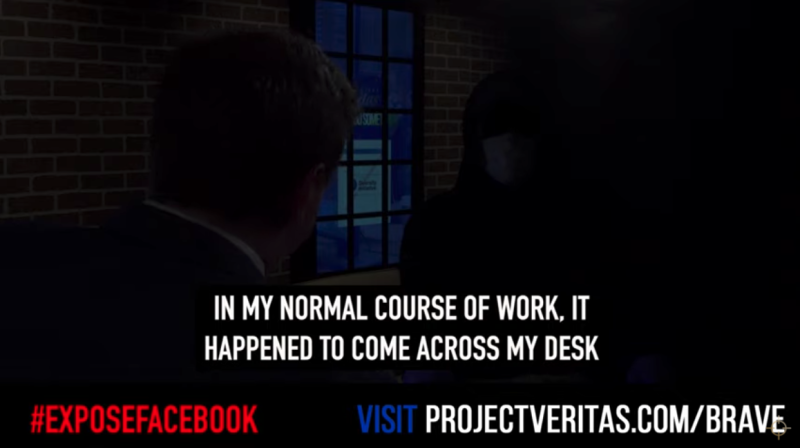 When Project Veritas followed up by phone and email before deadline, the company refused to comment on the existence of “Diversity Initiative Board (DIB), their H-1B visa policy and why priority may be given to Chinese and Korean nationals over Americans.

“I know several people who were invited in to work,” he said. “They were given 60 days, and the first 30 days they had someone shadow them and the next 30 days someone trained them and then they were then released,” he said.

“I've seen the destruction and the damage that this H-1B visa issue has caused living in the [San Francisco] Bay area,” the insider said.

Steve R. Klein, a constitutional lawyer, told O’Keefe that employment practices spelled out in the confidential Facebook document potentially create both federal and California legal jeopardy for the company.

“…this document that not only is that discriminating against Americans or suggesting a policy that does that, it's also even within the H-1B process, saying that applicants from China and Korea will be prioritized to foster larger communities of diverse workers and
Facebook,” Klein said.

Klein told O'Keefe: “California employment law really parallels the federal Civil Rights Act in a lot of important respects, and if this is policy that's being implemented at Facebook, it should raise concerns among people applying to Facebook.”

Under federal law, penalties for aggrieved applicants or employees can include back pay, costs, civil fines, injunctive relief such as reinstatement or promotion, attorney fees, and pain and suffering damages up to $300,000, Klein said.

At the end of the interview, O'Keefe conducted with Mr. X, he asked him about his role as a Project Veritas insider.

“Mr. X, let me ask you this question. If another insider were to ask you, well, should I go to project Veritas, what would you tell them?” he asked.

“I would tell them: yes. I believe they have the resources to assist you, and they take confidentiality quite seriously, and they will listen if, if no one else will, if you do feel that whoever you're involved with, whatever large corporation that is.”