In a video that debuted yesterday, Brown made an off-handed remark that according to Facebook was ‘disgusting and unacceptable’ and ‘made prior to the work she did on the Facebook contract and we were unaware of them.’

In a text message received by James O’Keefe, CEO of Project Veritas, Brown confirmed she has been fired from her job.

“I have now been fired from my temp agency because of this video and I’ve received death threats. Thank you for absolutely screwing up my life.”

It came to light after the video was released that Brown in fact worked for US Tech Solutions, a sub-contractor for Facebook.

In a phone conversation with Agarwal, O’Keefe pressed for a comment or reason of the termination.

JOK: Leslie Brown is an employee at your company, uh, and has done work with Facebook. And she was on a tape today saying, uh, some comments that, you know, we can confirm with her that she has in fact been terminated from your company I’d like a comment from you about why she was terminated.

MANOJ: We’re a contracting agency, they work for our clients. So I don’t really know… It’s the clients that make the call, not us. They hire the contractors.

JOK:  Understood, and you guys work with Facebook, correct?

MANOJ: Yes, Facebook is one of our clients, I will call them, but I don’t handle that
how long they work or [inaudible]. 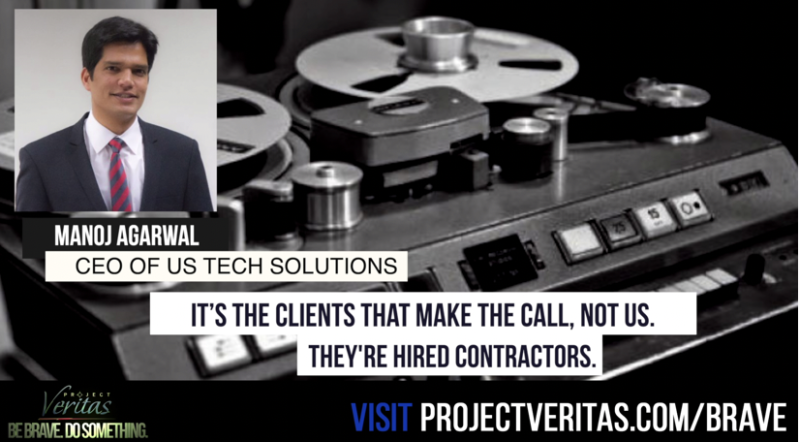 Listen to the audio here.

In an email to Project Veritas, Agarwal reaffirmed his comments saying only the client (Facebook) can make hiring/termination decisions.

“Any contractor hiring/termination is confidential information and we cannot comment to a third party on it. We will be happy to respond to Leslie directly if she has any questions about her temp assignment with US Tech."

"The individual who made those comments has never been a Facebook employee, but was a temporary contractor employed through one of our partners and is no longer on assignment with Facebook. While such comments are disgusting and unacceptable at any time, they were made prior to the work she did on the Facebook contract, and we were unaware of them.”

The story is still developing.