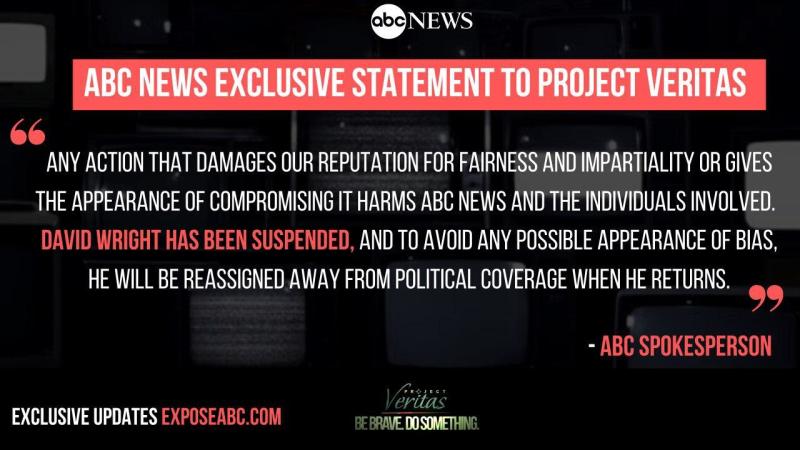 [Washington—Feb. 26, 2020] ABC News gave an exclusive statement to Project Veritas after ABC was shown the undercover video of veteran ABC News Correspondent David Wright describing himself as a “socialist” and complaining that his bosses refuse to give President Donald Trump credit.

This is the exclusive statement given to Project Veritas by ABC News: “Any action that damages our reputation for fairness and impartiality or gives the appearance of compromising it harms ABC News and the individuals involved. David Wright has been suspended, and to avoid any possible appearance of bias, he will be reassigned away from political coverage when he returns.”

Wright was covering the New Hampshire primary for “Nightline,” when he revealed his frustrations with his bosses for refusing to cover President Donald Trump fairly and not giving voters fair coverage of the presidential campaign.

The veteran reporter was asked by an undercover journalist if he was a Democrat Socialist, the ABC reporter replied: “Oh yeah. More than that I would consider myself a socialist; like I think there should be national health insurance. I’m totally fine with reigning in corporations, I think they’re too many billionaires, and I think there’s a wealth gap–that’s a problem.”

Wright said he and other members of the mainstream media were confused by Trump: “We’re in this awkward moment…we have this f**king president, and we can’t figure out how to challenge him.”

James O’Keefe, the founder of Project Veritas voiced support for suspended ABC News senior political correspondent David Wright, who the network sanctioned for identifying himself as a socialist to Project Veritas undercover reporters recording him in a hotel bar.

“We commend David Wright for his honesty,” said James O’Keefe, who founded Project Veritas in 2010. “No one should be suspended from their job for truth-telling.”

O’Keefe said Wright was honest about what about the mainstream media, especially the big networks.

Project Veritas will continue to investigate corruption in the Mainstream Media and our ABC News Insider is still operating inside the company, O’Keefe said. “We encourage Brave Insiders within these media organizations to come forward with any information they have, so that the public knows what is really going on inside these companies.”

Insiders can contact Project Veritas at VeritasTips@protonmail.com or send us a secure Signal message 914-653-3110.