UPDATE: 3:48 PM | Project Veritas attorney Benjamin Barr filed a complaint with the Department of State regarding the findings of our video. See the complaint here.

UPDATE: 2:22 PM | A Department of State spokesperson issued the following response to an inquiry from The Epoch Times:

“I can confirm Stuart Karaffa is a Management and Program Analyst with the Bureau of Overseas Buildings Operations.

We take seriously any allegation of a violation of the Hatch Act and financial disclosure rules and are closely reviewing this matter.

This is a personnel matter that we cannot comment on further at this time.”

Metro DC DSA is a socialist group that works to advance progressive causes in the metropolitan DC area.

Socialist Activism at the State Department

Mr. Karaffa’s loyalties seem to be with DSA, not with his employer. 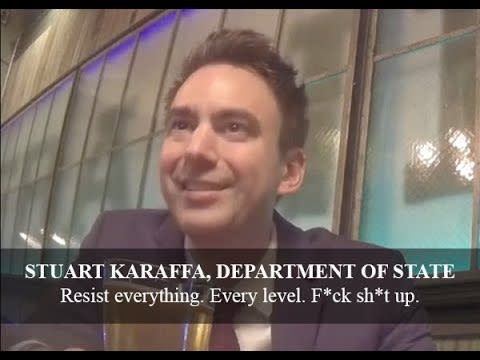 Karaffa told an undercover Project Veritas journalist that he performs DSA activism while at work for the State Department. He explained that he drafts DSA communications while on the job at State Department:

“… I’m careful about it. I don’t leave a paper trail, like I leave emails, and like any press s**t that comes up I leave that until after 5:30. But as soon as 5:31 hits, got my like draft messages ready to send out.”

Karaffa also admits that on behalf of DSA he monitors Virginia political news online while at work:

“You could put two and two together probably. With like web traffic…. So with web traffic, I mean I could make the case before a court of law that- I’m going to the Virginia sort of, campaign finance website- that I’m just interested in what people are doing politically. But if they also go and look at like DSA minutes and like Officer positions they’ll be like, ‘that’s weird, you were the co-chair of the electoral caucus, and you spent three hours on a Virginia campaign finance website.'”

Karaffa does not believe that he will be caught and punished by the appropriate authorities, saying, “Maybe someday I’ll go to board of elections jail, probably not.”

Karaffa does not seem to be concerned about disciplinary action from the State Department: “I have nothing to lose. It’s impossible to fire federal employees.” When asked if his supervisor at the State Department knows about his activism, Karaffa reveals that “nobody knows” about it.

Some government employees are required to regularly submit disclosure forms to help management identify any potential conflicts of interest that may interfere with job responsibilities. Despite disclosing his political activities and officer positions on his financial disclosure form, Karaffa alleges that:

“… somebody just rubber stamps [the form] and it goes forward… I don’t know if [the ethics officer is] all there. He’s so checked out…”

In one exchange, Karaffa’s attitude towards the current administration’s official policies appears to conflict with his duty to be impartial as a State Department employee. Karaffa says:

“Resist everything… Every level. F**k sh*t up.”

Stuart Karaffa is just the first federal government employee that Project Veritas has recorded in an undercover series unmasking the deep state.

“We’ve heard a lot about the Deep State; holdovers from the previous administration resisting change or nameless and faceless bureaucrats slowing things down or leaking secrets in an effort to undermine this administration,” said Project Veritas President James O’Keefe. “What is truly striking is their boldness, they are not afraid.  They are even boastful about a warped reality, where they won’t get caught and can’t get fired even if they did.”