[WASHINGTON DC- January 13, 2022] Members of both chambers of Congress have sent scathing letters to government officials seeking answers in the aftermath of military documents uncovered by Project Veritas which revealed a proposal from EcoHealth Alliance to research bat-borne coronaviruses that was rejected by DARPA and a potential cover-up of those documents. 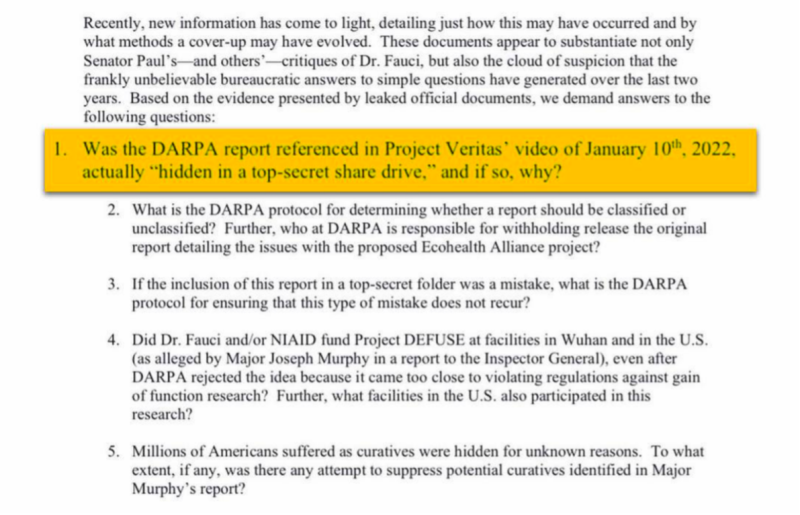 The letter from members of Congress comes on the heels of a similar inquiry made by Senator Ron Johnson:

On January 10, 2022, Project Veritas published an August 2021 disclosure from U.S. Marine Corps Major Joseph Murphy concerning the origins of COVID-19. According to the document, Major Murphy sent the disclosure to the Department of Defense (DoD) Office of the Inspector General (OIG) for investigation. It is my understanding that the disclosure was subsequently referred by the DoD OIG to the DoD’s Research and Engineering office for further investigation.

According to the Major’s disclosure, EcoHealth Alliance (EcoHealth), in conjunction with the Wuhan Institute of Virology (WIV), submitted a proposal in March 2018 to the Defense Advanced Research Projects Agency (DARPA) regarding SARS-CoVs. The proposal included a program, called DEFUSE, that sought to use a novel chimeric SARS-CoV spike protein to inoculate bats against SARS-CoVs. Although DARPA rejected the proposal, the disclosure alleges that EcoHealth ultimately carried out the DEFUSE proposal until April 2020 through the National Institutes of Health and National Institute for Allergy and Infectious Diseases. The disclosure highlights several potential treatments, such as ivermectin, and specifically alleges that the EcoHealth DEFUSE proposal identified chloroquine phosphate (Hydroxychloriquine) and interferon as SARS-CoV inhibitors.

Johnson went on to cite Project Veritas’ report while setting a January 25th deadline for the recipients of the letter to respond to the following questions:

1.     Did the office of Research and Engineering receive a copy of the enclosed disclosure from the DoD OIG? If so, please provide the date it received the complaint.

2.     Has the office of Research and Engineering or another DoD component initiated an investigation of the allegations in the disclosure? If so, explain what investigative steps have been taken thus far. If not, please explain why not.

3.     Has the office of Research and Engineering or another DoD component interviewed or spoken with the U.S. Marine Corps Major who drafted the disclosure? If so, when? If not, please explain why not.

4.     Does DoD intend to create a written investigate report or any other document based on its investigation of allegations contained in the disclosure? If so, please provide a copy of those documents. If not, please explain why not.

Senator Johnson went on to request a briefing on the findings of any investigation into documents obtained by Project Veritas while requesting to speak with U.S. Marine Corps Major, Joseph Murphy, to discuss his disclosure as soon as possible.