[DENVER—Oct. 13, 2020] Project Veritas released a video today from its investigation into the radical and violent agenda of a prominent member of Our Revolution, a partner of the Democratic Party coalition.

“I am going to do everything morally acceptable to win. I will lie. I will cheat. I will steal. Because that’s morally acceptable in this political environment. Absolutely. We are pirates on a pirate ship,” said Kristopher Jacks, who functions as trainer, mentor and on-the-ground quarterback at Our Revolution protests.

“I want to make this point very loudly and very clearly. I said it nicely before, but I’ll say it more curtly now. 2020 is a political revolution,” said Jacks.

James O’Keefe, the founder and CEO of Project Veritas said, “We’ve been following Kris Jacks for a long time. We first met him, during the presidential primary race. Now, we have caught up with him in Colorado.”

“Jacks represents the radical wing of the Democratic Party in Colorado--he is someone most Americans should be afraid of,” O’Keefe said.

Kristopher Jacks: “I think the right wing has a monopoly right now on strong, violent rhetoric, and I think they underestimate how many people on the left are organized, trained, armed, and ready to go should they decide to do their sh*t. And I think all it will take is our numbers and a reminder that yeah, there’s a reason you guys feared the Communists more than you feared the Nazis.”

Journalist: “So, you think the right wing—"

Journalist: “Who’s the people on the left though?”

“We have Jacks on tape saying: ‘I will knock people down the stairs as long as they don’t die to make this happen’ and ‘When I look at everything, I mean again, I believe there is absolutely justified violence in all sorts of circumstances,’” O’Keefe said.

Jacks: “Antifa’s great, man. I think it’s uh, Charlottesville dude. When you got people marching in the street, running people over and sh*t like that, you got people firing guns, trying to provoke sh*t, yeah even people there that are willing to stand between them and ordinary people.”

Journalist: “Yeah, I like that hit-the-streets-type mentality, you know.

Jacks: “Yeah, no and there’s definitely, there are definitely times for it, I just don’t think it’s uh, I mean it’s--that awesome thing that’s, one of those cards you have to have in your back pocket, man. Martin Luther King wouldn’t have been as successful if it wasn’t for Malcolm X and Nation of Islam, Black Panthers, all of them doing their thing too.”

“I’m gonna be in my garage, right next to my gun safe, all night long, on the 3rd, because that is how seriously I take this stuff,” Jacks said.

Jacks even talked about the armed Antifa groups who take inspiration from John Brown, the man who led the failed raid the federal arsenal at Harpers Ferry, Virginia in 1859.

“It’s incredibly scary,” he said. “You know it’s gonna be like at that point, you know that’s when you gotta find like the John Brown Gun Society people. You know there’s gonna be, just look at every--its history, right?”

Jacks said he is ready for insurrection.

“Well, when it comes to civil war, violence type stuff there’s always military guys, like former guys that stand up for the right thing--when that time comes, then we gotta get some of those type people involved,” he said.

Kristopher Jacks: “If you want to do some Versailles shit. If you want to do some Antifa shit. You really want to change this country that way, with violence, there’s only one way to do it. You gotta get people that are close to billionaires and start just, random billionaires start turning up dead. And nobody knows what the f**ks going on. Nobody knows. Nope, I don’t know. They just turned up dead. And just three or four of ‘em is all it’s going to take. All it’s going to take is a pattern of I don’t know, I don’t know man. I don’t know what happened. Just showed up that way. I walked in. That’s how it was. That’s the only way that’s, you do that to three or four people enough to say that this is a pattern, and this is why – draw a dollar sign on their desk or whatever you do, that’s what it’s going to take. It’s going to take a strategic hit against the .1% that’s in charge, cause that’s who it is. Killing random Nazis in the street, random f**king bootlickers.”

Journalist: “But like who are those like three or four billionaires right now that if it went to that?”

Jacks: “Doesn’t matter who… I mean Bezos at the top of the list.”

Journalist: “What do you mean? Guillotines?”

Jacks: “Unions have power because they used to stab mother f**kers, they used to bury people beneath Giants Stadium. We have power. Populist uprisings have power because we used to kill people. We used to hang people from gas stations. We used to cut off their heads. We don’t have to actually cut heads. We just have to say that we’re willing to cut off heads. You know what I’m saying? Nobody wants a slicey boi. Nobody wants one of those.”

Jacks had harsh words for moderate Democrats, in the series of Project Veritas hidden
camera recordings.

“Half of the struggle that I have isn’t with Republicans, it isn't with the right-wing,” Jacks said.

“It's with f**kin moderates in the Democratic Party with all these people that are just scared of Trump. ‘Oh my God. I'm so scared. I got to do something,’ which is show up and piss off leftists.”

Jacks told a Project Veritas journalist that despite his misgivings about moderate Democrats, he knows former Vice President Joseph R. Biden Jr., will cooperate with his radical agenda—or face protests that will trap him in the White House. 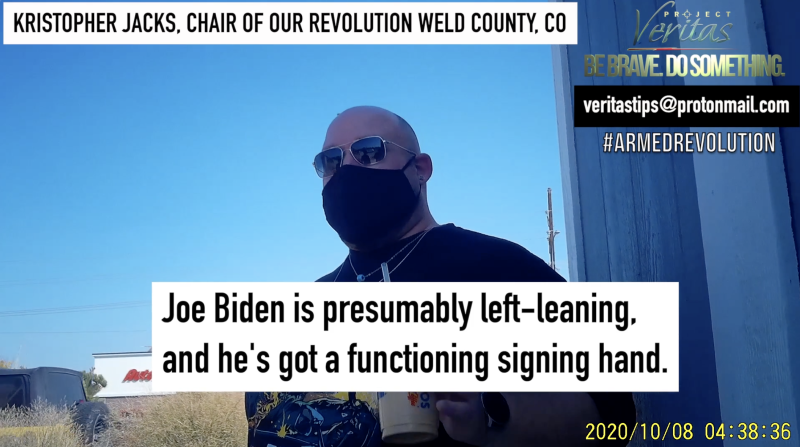 “Joe Biden was presumably left-wing, and he's got a functioning signing hand,” Jacks said. “As long as there's progressive legislation that comes across his desk, I am confident we can occupy his house. We know where he’ll live, and yeah, he wants to veto Medicare For All. Let him veto it! He's never leaving that house again without protest.”

Jacks said the previous four years of violent protests have just been practice.

Journalist: “That's what I'm saying, the Green New Deal, Medicare For All. What do you think's going to happen if he does?”

Jacks: “If he [Biden] does veto, it will be mass protests in the streets because that is the - we're already ready to do it. We’re on. The left is already geared up. We've been practicing for four years against somebody who doesn't listen. Now, we're going to go up against Democrats who are the world's biggest p*ssies, who fold all the time.”

Project Veritas is a registered 501(c)3 organization. Project Veritas does not advocate
specific resolutions to the issues raised through its investigations. Support our work today!