[ATLANTA – Apr. 26, 2021] Project Veritas founder and CEO, James O’Keefe, announced another defamation lawsuit today – this time against cable news network CNN, for contradicting its own reporting and allowing false statements about Project Veritas to be aired.

The suit focuses mainly on the actions of anchor, Ana Cabrera, who made false claims back in February about why Project Veritas’ Twitter account had been removed from the platform.

She claimed the removal had been part of a “much broader crackdown… by social media giants on accounts that [were] promoting misinformation,” when in fact, the ban was carried out on the basis of privacy violations.

Cabrera knew what she was reporting was false.  Just days earlier, Cabrera had tweeted that the ban was in fact for an alleged violation of Twitter’s privacy policies – not for misinformation as Cabrera stated. 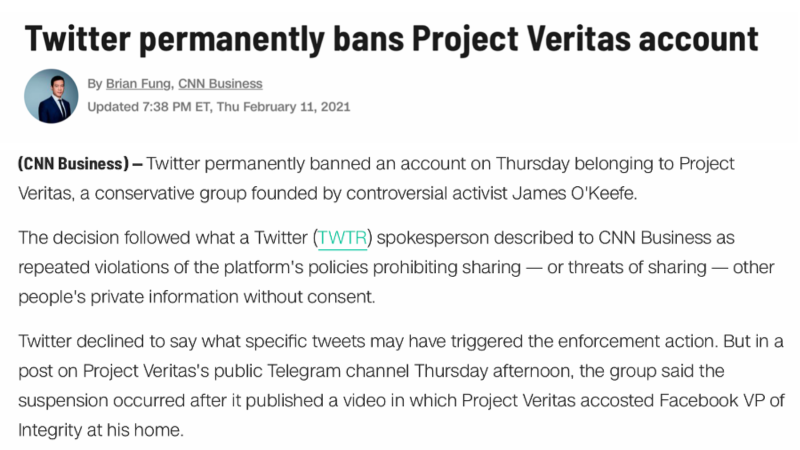 Veritas’ lawsuit against CNN states: “Cabrera was fully aware of Twitter’s basis for the Project Veritas ban, as on February 11, 2021, she tweeted that “Twitter permanently bans Project Veritas,” and that ‘the decision followed what a Twitter spokesperson described to CNN as repeated violations of Twitter’s policies prohibiting the sharing – or threats of sharing – of other people’s private information without consent.’” 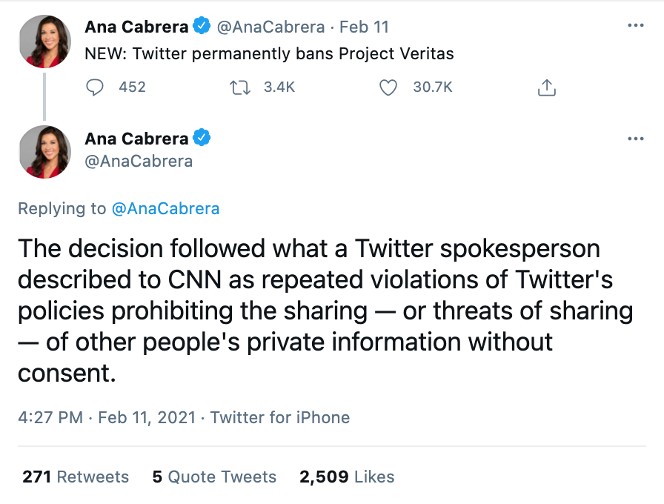 Project Veritas is undefeated in court and will continue to expose the media, government, Big Tech, and any other organization that seeks to defame and destroy the reputations of hard-working and honest citizens.

If anyone has information regarding corruption inside public or private institutions -- send an encrypted message to: VeritasTips@protonmail.com.