This report is the second phase of Project Veritas’ ongoing investigation into ABC News—following up on the insider-provided tape of news presenter Amy Robach’s hot-mic lament that her ABC News bosses spiked her comprehensive report on Jeffrey Epstein.

“We would not put it on the air,” Robach said. “It was unbelievable what we had, Clinton, we had everything.”

ABC News tried but could not find the Project Veritas insider and the insider continues to gather damaging information from behind the network walls.

The two newsmen recorded in New Hampshire are long-time veterans of ABC News and spoke from the perspective of covering multiple political cycles—where they have watched the degradation of their network’s integrity and commitment to news gathering.

Wright is a Buffalo-native was recorded speaking at a bar at the Doubletree Hotel in Manchester, during coverage of that state’s first in the nation primary. Throughout the conversation, the graduate of both Harvard and Oxford said he was frustrated with how the media and Democrats have been unable to take on Trump.

“We’re not disciplined enough to cut [Trump] off and we second-guess ourselves because we’re sensitive to the accusation that we’re in the tank for the Democrats. And so that enables them, and so we enable them. And every time we take the bait on it and that’s what he wants,” he said. “It’s totally and abusive relationship. He’s [Trump’s] the nightmare spouse that you can’t win an argument with.”

Besides his personal animus for the president, the reporter said he was firmly a man of the left.

Q: “Would you consider yourself a Democrat Socialist?”

Wright: “Oh yeah. More than that I would consider myself a socialist; like I think there should be national health insurance. I’m totally fine with reigning in corporations, I think they’re too many billionaires, and I think there’s a wealth gap--that’s a problem.” 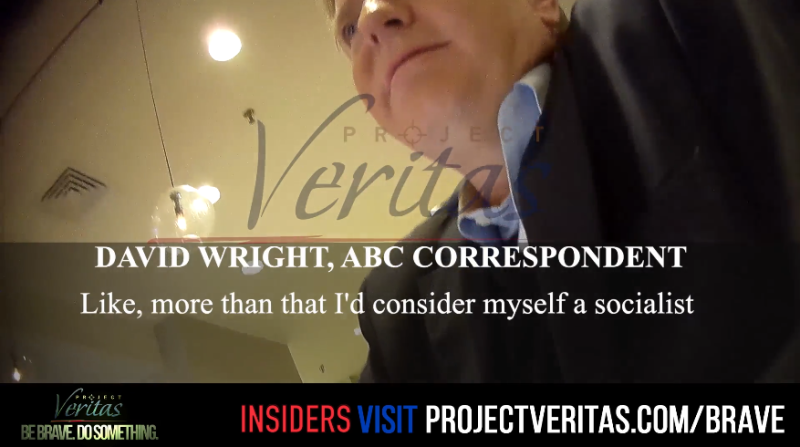 The ABC News reporter was covering the New Hampshire Primary for “Nightline,” the same role he had for the 2016 presidential campaign. He also covers Capitol Hill and the White House and is best known for his in-depth reporting of the clerical abuse scandal in his hometown.

As a national political reporter at a legacy broadcaster, Wright said he feels left behind by the new digital media.

“We live in a moment where people live in echo chambers and the truth suffers and, in an effort, to compete, we’ve become an echo chamber ourselves. We’ve been in the mainstream media we have an effort to match the zippy news cycle with responding to the latest tweet and trying to keep pace with the desperate pace of it all.”

The desperate pace means reporters like him lose focus, he said.

“As a result, we’re easily distracted and that means that we don’t bring focused attention to something that could make a difference,” he said. “I think, some of that at least in the place that I work [ABC News], and places like it, is that we’ve, with Trump we’re interested in three things: the outrage of the day, the investigation, and of the palace intrigue of who’s backstabbing whom. Beyond that, we don’t really cover the guy [Trump].

Wright said no one could stop Trump from dominating the news cycles every day. “The first story is the big story, about Trump. And it’s about whatever outrageous thing he said or tweeted about, and it’s about, or it’s about this effort to unseat him, or it’s about, you know, ‘Today we found anonymous’ or ‘Who’s he [Trump] throwing out of the White House today/’ or ‘Who’s blowing the whistle and stabbing him [Trump] in the back?’”

Trump’s domination of the media also leads to reporters not reporting the positive stories about the president. “We don’t hold him [Trump] to account. We also don’t give him credit for what things he does do.”

Q: “How do you feel about it though?”

Wright: “I feel terrible about it. I feel that the truth suffers, the voters are poorly informed, and people don’t have the opportunity to tune into whatever they want to here. It’s like there no upside in, or our bosses don’t see an upside in doing the job we’re supposed to do which is to speak truth to power and hold people to account.” 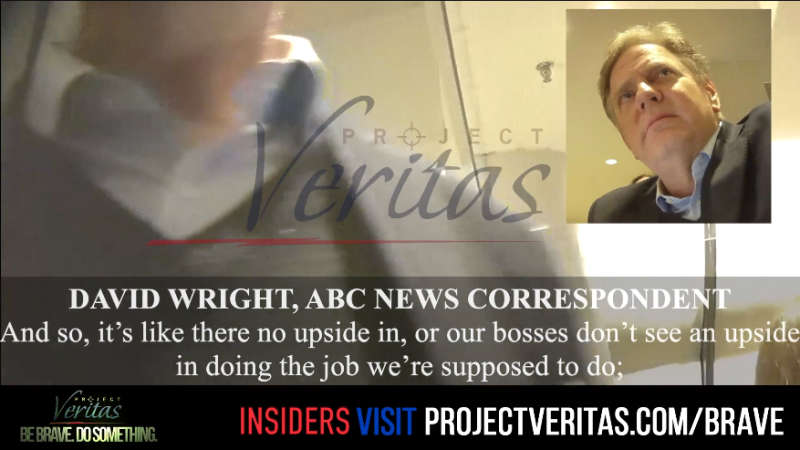 At another point in the conversation with a Project Veritas journalist, Wright pulled another ABC News employee, Drew, into the discussion and asked him: “Would you say we feel guilty about picking up Trump and pumping up--how we cover this stuff and giving Bernie a free pass?”

“Who do you feel we give Bernie a free pass?” Drew replied.

Q: “Well, what I mean is anything being done differently – well frankly we put it right with diagnosing the problem on the Democratic side. I mean do you see what I mean about Bernie?”

Wright: “Yeah, I think, you now, Bernie is very old and I think he doesn’t want to admit that. Bernie is also I think he- like he believes in the movement that he started. And, he did really, he was John the Baptist; you know but he doesn’t need to be a messiah.”

He went on to say that he puts his hope on Sen. Elizabeth Warren (D.-Mass.) to be the practical choice for president. “Setting aside my professional dispassion, I worry that if he’s [Sanders] elected, he’s not going to get anything done. Because he hasn’t gotten anything done. Where I do think Warren taking those same issues could get something done.”

Sanders won the New Hampshire Primary with 26 percent of the Democratic ballots cast with Warren finishing fourth with 9 percent.

ABC News told Project Veritas it would comment on these videos, but had not responded with that comment before deadline.