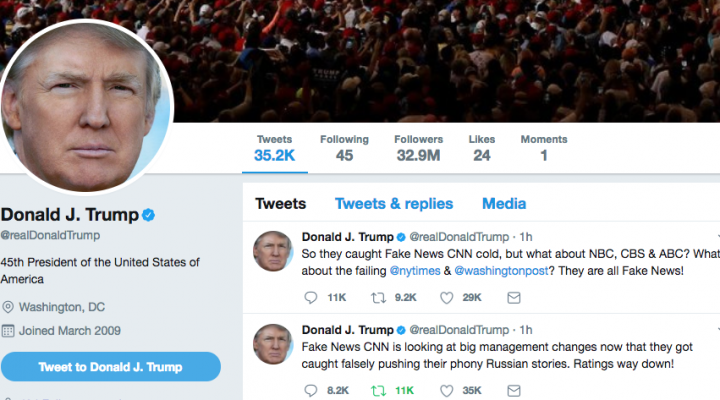 Jim I think it's time for a full retraction for this tweet. Its obviously a lie based on the video I just saw form @Project_Veritas #maga https://t.co/oueEC31dbM

He has very good instincts about these kind of things. https://t.co/z2WfeJIObb

Shortly after, the President himself tweeted the following about Fake News reported by CNN:

Fake News CNN is looking at big management changes now that they got caught falsely pushing their phony Russian stories. Ratings way down!

President Trump continued the Fake News conversation, asking about the rest of the MSM being held accountable as well, by tweeting:

So they caught Fake News CNN cold, but what about NBC, CBS & ABC? What about the failing @nytimes & @washingtonpost? They are all Fake News!

James O’Keefe from Project Veritas responded to the President directly by tweeting the following:

Don't worry Mr. President, they are on our list, too.

CNN finally responded to the President’s “allegations” with the following Tweet:

CNN just posted it's most-watched second quarter in history. Those are the facts.

The Washington Post attempted to criticize President Trump’s timing of “renewing his attack on fake news CNN” after the recent retracted story about alleged ties between Trump’s allies and Russia. Donald Trump Jr. responded to the article on Twitter with the following statement:

I'd say he renewed his attacks after it was widely known that @Project_Veritas had video proof that #fakenews was being created by @cnn https://t.co/zEQ9LgTvCP

.@CNNPR Of course the ratings are high, bc Zucker is pushing fake Russia news narratives! IT'S IN OUR VIDEO!
LINK: https://t.co/JuqAYAUVfM

Several other news sources have reported on the American Pravda Video from Project Veritas, including: Drudge, Russia Today, The Daily Caller, RT, Rare.us, The Hill, …

James O’Keefe stated the following in response to The President’s comments on the American Pravda story:

“President Trump said CNN was fake news and we just proved it. He asked about the rest of the mainstream media. They are on our list. More to come…"