(Michigan) Project Veritas has released undercover footage and documents obtained from the American Federation of Teachers Michigan affiliate office in Lake City, which reveals that the union protected a teacher after accusations of sexual misconduct with a seven- or eight-year-old girl arose.

This long-awaited release comes after a federal judge ruled in favor of Project Veritas and the First Amendment after Michigan AFT tried twice – and failed twice – to halt the release of the video.

Despite the damning evidence against him, Project Veritas decided to redact the identity of the now former teacher because he was never charged or arrested.

The alleged charges against the teacher, as memorialized in a Lake City Area Schools document, read:

“It is alleged that [REDACTED] engaged in a course of inappropriate conduct with one of the District’s female students. (Jane Doe) who was aged 7 or 8 at the time…”

According to the police report, the incident occurred some time in 2006, but was not reported until 2013 when the alleged victim happened to become a student of the teacher. Mickles, who represented the teacher, corroborates this in a meeting with a Project Veritas undercover journalist: 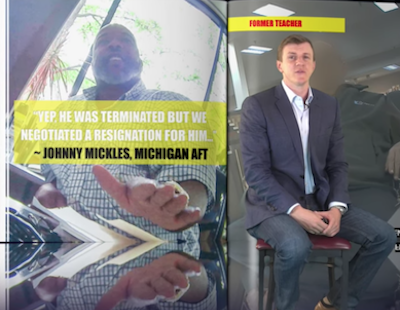 According to Mickles, the superintendent wanted to terminate the teacher,but the union negotiated a resignation with the district which allowed him to keep his teaching certificate, and included six weeks’ pay and $50,000:

“He was terminated but we negotiated a resignation for him… he didn’t lose his [teaching] certification.”

“… he got to be on leave until they drew up the settlement and then he got, like, the rest of the school year’s pay out… He got about six weeks of pay I think… and then he got a $50,000 pay out.”

In conversations with a separate undercover journalist, the former teacher admitted to the validity of the accusations and the union’s help:

“There was a situation where somebody accused me of something that I didn’t do… So I finally said, you know what, I’m just going to retire…There were no charges. Nothing ever came of it.”

“There was an incident, they said there was a gal that I had dated and she had a daughter and there was an accusation that had something to do with her daughter which wasn’t true.”

The former teacher also explains his experience in dealing with the union’s attorney:

“I mean the attorney told me, ‘hey, in situations where somebody accuses you of something, you might as well- you know what? Chances are they’ll find a way to make it convenient for you to leave.’ That’s what he said.”

James O’Keefe, founder and President of Project Veritas said of the investigation:

“For the record, this former teacher was never charged and never arrested in this case. All we know is that the union, AFT Michigan, and the Lake City Area schools had a problem: A teacher was accused of a serious crime and the solution they came up with was to pay the teacher a bucket of money so he would just go away. If he wanted to go teach somewhere else, so be it. It would be someone else’s problem, and the parent’s would be none the wiser.”

“This is one reason why Patrick Colbeck led the charge in the Michigan State Senate to pass Right to Work in 2012.  Teachers should have the right to decide if unions are working in the best interests of a public school environment.  Termination settlements are costly and eventually make it harder to reward the teachers who do perform and are not a threat to children.” – AnneMarie Schieber Dykstra, Communications, Colbeck Campaign

“If any of this is true it is outrageous and Michigan taxpayers should be reimbursed the total cost of the settlement by the teachers union.” – Dr. Jim Hines

This video comes after the release of two undercover videos of NJEA officials which led to the suspensions of Dr. David Perry, President of the Hamilton Township Education Association and Kathleen Valencia, President of the Union City Education Association. NJ State Democrats including Governor Phil Murphy have called for hearings to investigate the practices of the NJEA.