(Derry, NH) After a series of Project Veritas investigations conducted across the state of New Hampshire yesterday, Project Veritas journalists uncovered an election official, Beth Hunter, at the polling location for Ward 01 and Ward 04 in Derry, NH opening up about her political inclinations and illegally influencing voters on Election Day. According to the state’s law, election officials are prohibited from influencing a citizen’s vote in favor of a candidate or political party. After a state-wide effort in New Hampshire by the Project Veritas team to expose electoral corruption, these exclusive undercover recordings show Beth admonishing Donald Trump’s decision to award Rush Limbaugh the Medal of Freedom while also telling undercover journalists that ‘voting for any Democrat is wise.’ Upon being confronted for making these statements, Beth admits she shouldn’t have talked about Limbaugh while performing her role as an election official but claimed she was unaware about breaking or even knowing the New Hampshire law against electioneering.

In a conversation with Project Veritas journalists at the Gilbert Hood Middle School Ward 01 & 04 Polling Station, Beth reveals and openly discusses where her political allegiances are:

BETH: “Last night it was Bernie and Pete Buttigieg – he’s a nice guy. There you go. I can only tell you what’s on the TV…”

JOURNALIST: “But can you tell me if that’s wise or not?”

BETH: “Oh, I think it is. I think voting any Democrat is wise.”

BETH: “I have to tell you I was almost in tears on who gave that award to that radio…”

BETH: “I don’t watch a lot of TV because I was campaigning – I was keeping up on it, so and whoever is nominated I’m going to be campaigning for them.” 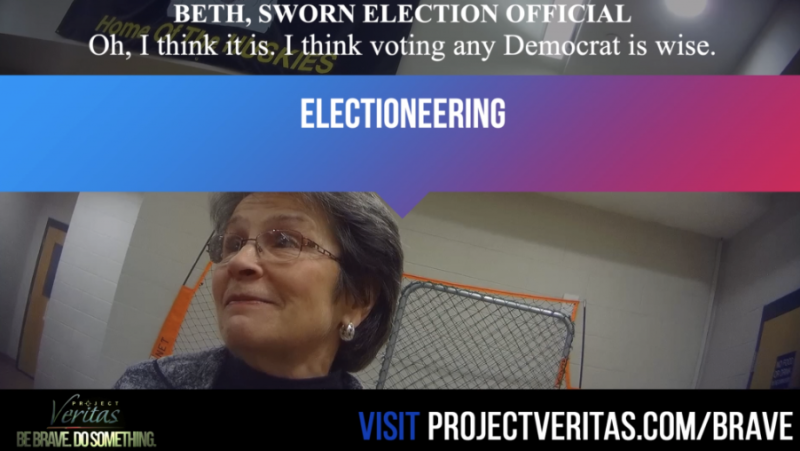 We have asked New Hampshire election officials what “Beth’s” capacity was while she was acting for the state at the Derry, New Hampshire polling location.  Mary Till responded to Project Veritas’ request prior to publication and confirmed that “Beth Hunter was volunteering to work as a greeter at Gilbert H. Hood Middle school from 2:30 to 8 p.m.”

Electioneering at the Polling Place.

“No election officer shall electioneer while in the performance of his official duties. For the purposes of this section, “electioneer” shall mean to act in any way specifically designed to influence the vote of a voter on any question or office. Any person who violates this provision shall be guilty of a misdemeanor.”

Project Veritas President James O’Keefe tracked down Beth and asked her about her statements. These are the responses Beth provided to Project Veritas:

JAMES O’KEEFE: “Are you allowed to get political as an election judge?”

JAMES O’KEEFE: “But was it ‘getting political’ by talking about Rush Limbaugh?”

BETH: “Yeah, when they asked me about it. I guess I shouldn’t have replied to them, huh.”

JAMES O’KEEFE: “You shouldn’t have talked about Rush Limbaugh?”

JAMES O’KEEFE: “Are you aware of what the laws are in New Hampshire?”

JAMES O’KEEFE: “Is that an excuse to break the law?”

BETH: “I didn’t know I was breaking the law.”

JAMES O’KEEFE: “…she was telling us who to vote…uh, this Beth individual…we believe that that’s a violation of the state law…she told us that she doesn’t know what the law is…so that may be something you want your people to know…so whether she’s a volunteer or a public employee, she probably should know what the law is.”
TINA GIFFORD, NH ELECTION DEPUTY MODERATOR: “We’ve had training, but not everyone attended training. A lot of the volunteers didn’t attend training.”

The roles and responsibilities of an election Moderator in New Hampshire, and in every state, exist in order to ensure that the many moving parts of our elections process comply with the law.  In an article published in the New Hampshire Bar Journal titled, “The Role of the Moderator as an Election Official,” attorney Charles F. Tucker wrote:

[t]he most interesting part of the moderator’s role (is) to be the enforcer of what may be categorized as “the rules” to encourage, if not guarantee, fair elections.

Attorney Tucker went on to write:

The author has had occasion to assist an elderly person who requested assistance in voting and asked the moderator, “Who should I vote for?”  The moderator replied, “I cannot give you any advice in that regard.”  The voter replied, “I don’t know any of these people or what they stand for, somebody has to tell me how to vote.”  The moderator replied, “Well, there is no one who can help you do that in the voting booth at this point.”  The voter replied, “But I always vote, it’s my civic duty.”  The author suggested that she not vote on any of the questions on this occasion and turn her ballot in unmarked, with advice that next year she figure it out before she came in and perhaps mark a sample ballot which she would be allowed to bring into the voting booth as a guide.

In summary, this moderator thoroughly enjoys playing this role as a part of the democratic process and recommends it to others who want to do something to help keep the process strong.

Evidently, Attorney Tucker’s practice and procedure has not been adopted uniformly in New Hampshire.

As the 2020 election cycle continues, Project Veritas will increase its investigations into poll station malfeasance in order to ensure American citizens can vote freely and without influence from poll station officials. Voters must be able to cast their ballots without interference from any third party, including those in charge of organizing and overseeing the voting booths.