In this undercover investigation, Hamilton Township Education Association President David Perry details the steps the teachers union would take to protect a teacher who physically abused and threatened middle school students from losing their job.

Dr. Perry says he would misrepresent the events of altercations between teachers and students by "bending the truth" and back-dating reports and instructed the teacher to not tell anybody about incidents with students.

The union president also stressed that a teacher who abuses his students needs to come to the union after any incident so that they can create a report that would best protect them from students that come forward about abuse.

The New Jersey Senate held a hearing to investigate the actions of the NJEA. The calls for investigation were led by Democrats Senator Steve Sweeney and Governor Phil Murphy.

After the release of the videos, eleven bills advanced in the legislative process. Of the bills, seven were created as a direct result of our videos, while the other four were already in process. NJ101.5

In this undercover investigation, Union City Education Association President Kathleen Valencia explains that the union would protect a teacher who physically abused a "scumbag" student and the teacher would not lose his job.

Valencia says the teacher would be "fine" because the student is too scared to come forward. She also explains how the union would legally protect the teacher, stating “I’m going to get your brother a lawyer. Your brother’s not going to admit anything happened. The only witness is the scumbag kid… he’s got a record.”

She then tells the undercover journalist of a horrifying real-life scenario: “This file right here is from a teacher who had sex with a student. This file is about whether or not the teacher gets to keep his pension. Is he going to jail? No. How come? Because the child’s not pressing charges. There’s no proof.”

“If it’s true, it’s completely unforgivable and unacceptable, what was said.”

“[If union leadership] devised a way to get around reporting properly incidents in schools where kids have been physically assaulted, it’s a problem… It’s a real problem.”

“I think it’s enough issue when you have local leadership bragging about how they get around things, and how they can fix things, that it needs to be reviewed to make sure it stops.”

“The NJEA should see the upcoming legislative hearings as an opportunity to excise this cancer that exists among them that’s led to their horrific policy that every teacher should be protected at any cost.”

“I encourage the NJEA to come to the legislative hearings with solutions to propose. We all know that the toxic culture that’s plainly visible in the undercover videos is wrong, so let’s work together to fix it.”

“I can not accept that… a person is not ‘set up’ to say the following things: [Quotes the videos]

“…No one can set you up to say something like that.”

“We also recognize that despite the dishonest tactics used to obtain and edit the videos, some of what was said on them appear to fall far short of our values and the standards we set for our union, its leaders, and its members.”

Project Veritas has released undercover footage and documents obtained from the American Federation of Teachers Michigan affiliate office in Lake City, which reveals that the union protected a teacher after accusations of sexual misconduct with a seven- or eight-year-old girl arose.

The now former teacher was never charged or arrested and denied the accusations against him, and did not lose his teaching certificate.

A federal judge denied for – the second time – an attempt by the Michigan AFT to receive a temporary restraining order against Project Veritas, citing the First Amendment. Project Veritas 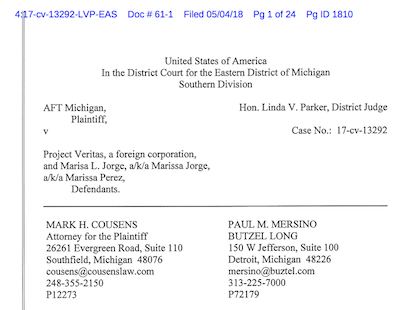 Nick Nugent, an NEA official in Michigan was caught on hidden camera. Once again, the union official is clearly more interested in protecting teachers than children. The video you are about to see and hear is troubling, our journalist, who says she is a teacher, tells the union official a story about a bloodied middle school student she “shoved.” The response, don’t report it and hope the student doesn’t either.

AFT President Randi Weingarten responded to the ruling in a tweet.

Project Veritas has released an investigation into the behavior of teacher’s union officials continues in Ohio. The scenario is relatively straightforward, our undercover journalist tells the union official his imaginary brother has had a violent altercation with a student. Once again, we hear encouragement that the brother will more than likely get away with the assault.

The undercover video shows Bill Siegferth, Tom Schmida, and David Romick – all current or former teachers union presidents –admitting that they have protected and defended union members that have abused students.

NEA Emails were leaked as a result

After seeing the undercover videos, somebody with access to internal NEA communications went public and aired his grievances with the union for all to see. Project Veritas

5/7/18 "O'Keefe may be a fifth-rate attack schnauzer, but his NJEA footage demands scrutiny" NJ.com