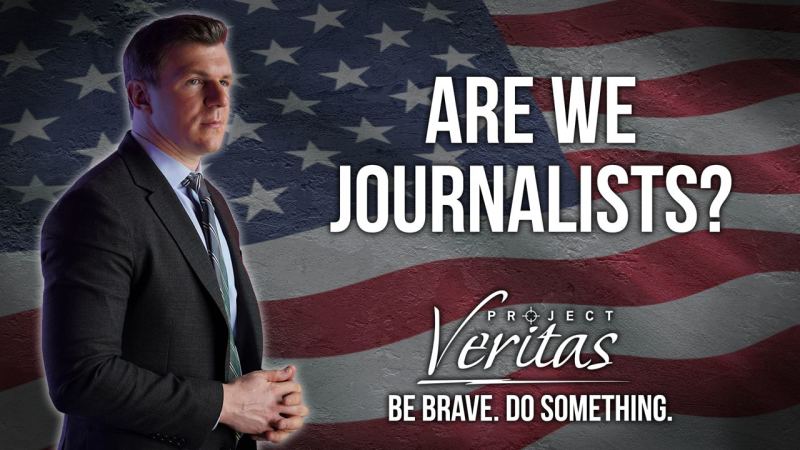 Despite the desire for Wikipedia and those with a dishonest motive to label Project Veritas as anything but journalists, government agencies, courts and other establishment media continue to appropriately refer to our activities under an umbrella of journalism. Project Veritas will continue to sue, depose, and expose those who defame us. In the meantime, here are some notable instances where judges and governing bodies got it right:

1.) The ACLU wrote an amicus brief in support of the New York Times’ appeal to overturn Justice Wood’s order for the NYT to destroy, return, and refrain from publishing Project Veritas’ privileged attorney-client memos. In that brief, the ACLU essentially called us a prominent nonprofit organization that practices journalism.

Information can be both highly sensitive and a matter of public interest, and "privacy concerns give way when balanced against the interest in publishing matters of public importance,” such as legal advice given to a prominent nonprofit organization regarding its journalistic practices.

For a content-neutral statute to survive intermediate scrutiny, it must be “narrowly tailored to serve a significant government interest and leave open ample alternative channels of communication.” Act Now to Stop War & End Racism Coal. v. District of Columbia, 846 F. 3d 391, 407 (D.C. Cir. 2017). The wiretapping statutes satisfy both requirements. The significant government interest is the deterrence of criminal or tortious acts such as blackmail that are facilitated by secret wiretaps. The exception is narrowly tailored to that end as its scope precisely tracks the behavior the government has a significant interest in deterring. Finally, the exceptions leave open ample alternative means of communication as defendants may continue to gather news from their sources, just not by using secret recordings when such recordings are for a criminal or tortious purpose.

Furthermore, while there is some difference between violating a policy by providing incorrect or misleading information and violating a policy by truthfully providing someone’s private information (and potentially exposing a person to harm), the distinction is not enough to make the statement at issue actionable as both violations are similarly damaging to the journalist’s reputation. Project Veritas’s allegations and arguments do not plausibly suggest that the truth (as pled in the Complaint) would have a different effect on the mind of the average reader in terms of the reputational harm.

4.) 4.) During the Shirley Teter case, Judge Reidinger referred to Project Veritas as journalists in court on multiple occasions. The transcripts from Day 1 and Day 2 of the trial can be found here.

In a directed verdict, Judge Reidinger stated in court:

The second point that was presented on behalf of the plaintiff was that Mr. Hartsock never asked Mr. Foval the name of the woman to whom he was referring. I find that argument to be unpersuasive because it is setting a standard of interview for journalists.

In the same case during oral argument on May 21, 2019, the judge compared interviews conducted by Mike Wallace to PV’s journalism, and said the following:

And if Mike Wallace conducted an interview of some person and then that person sued Mike Wallace and CBS alleging, well, there was actual malice there because Mike Wallace just didn't ask enough questions. How quickly do you think that that case would be thrown out of court?  It just -- it seems to me that that sort of standard for any type of journalist is one that eviscerates the First Amendment, doesn't it? […]

In other words, if a journalist is not 110 percent convinced of the absolute veracity of what his source has told him, then printing it anyway is actual malice. Again, it seems to me that you are setting a standard forth that completely eviscerates the First Amendment.

Later during the oral argument hearing, the judge discussed the fact that our journalist, Christian Hartsock, questioned Scott Foval in a bar. He said:

I need to back up a second because you said the standard is subjective knowledge that it might not be true. Again, I think every journalist who has ever conducted an interview or talked to somebody in a bar, or wherever that journalist talks to someone, has some subjective knowledge that what they're being told might not be true, regardless of who they're talking to.

“It is well-established that news reporting and journalism are entitled to free speech protections and subject to the anti- SLAPP statute when the reporting or journalism giving rise to the plaintiff’s claims “concerns a public issue or an issue of public interest.” (Lieberman v. KCOP Television, Inc. (2003) 110 Cal.App.4th 156, 164 (Lieberman), citing Braun v. Chronicle Publishing Co. (1997) 52 Cal.App.4th 1036, 1047, fn. 5.) The act of “newsgathering,” such as the recording and editing of footage, is also entitled to protection under the anti-SLAPP statute, even if the recording was made without the subject’s knowledge or consent, so long as the recording was used in connection with a report or article addressing a public issue. (See Lieberman, at p. 166; see also § 425.16, subd. (e)(4) [any “conduct in furtherance of” the exercise of free speech qualifies for protection under the anti-SLAPP statute].)

The conduct giving rise to all of Koerber’s claims against Project Veritas in this case—i.e., the recording, editing, and publishing of Koerber’s November 11, 2015 interview—falls within the scope of section 425.16. That interview focused on an issue of public interest—i.e., Common Core. As Project Veritas’s January 21, 2016 video report shows, Common Core was an issue discussed by several of the Republican presidential candidates during the 2016 primary election. Political issues are undoubtedly “protected under the First Amendment and section 425.16.” (Nagel v. Twin Laboratories, Inc. (2003) 109 Cal.App.4th 39, 47, citing National Endowment for the Arts v. Finley (1998) 524 U.S. 569, 603.) The footage from the November 11, 2015 interview also shows that Koerber played a role in attempting to influence the adoption of Common Core standards by government agencies. As we noted above, Koerber told the interviewers that she had recently conducted a “big presentation” for the “AP US History Agenda,” during which “Texas got upset” about the content of the curriculum.

In short, because “the surreptitious recordings [here] were in aid of and incorporated into a broadcast in connection with [a] public issue,” Koerber’s claims against Project Veritas fall within the scope of the anti-SLAPP statute. (Lieberman, supra, 110 Cal.App.4th at p. 166.)”

4. The filter team shall conduct a review of the responsive materials to determine if any should be withheld from the investigative team on any grounds—including grounds related to any First Amendment concerns, journalistic privileges, and attorney-client privileges.

7.) On May 26, 2022, FEMA denied Project Veritas’ application of Request for Public Assistance (RPA) related to clean up costs arising out of the damage caused by Hurricane Ida. However, in the denial, the federal agency specifically determined that:

“The primary function of Project Veritas is to provide investigative journalism services.”